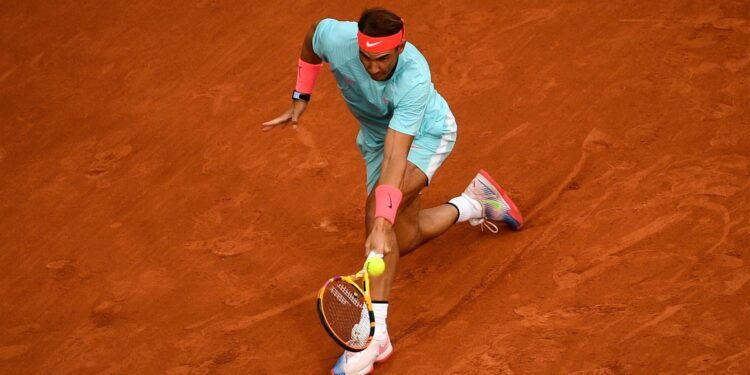 ”The King of Clay” as he is fondly referred to in tennis circles, Spanish player and world number 2, 12 time Champion at the Roland Garros, Rafael Nadal is back on familiar territory, his dominant territory by the way and he got to it immediately despite struggling his usual early slow start to prevail over his Belarusian opponent Egor Gerasimo in 6-4 6-4 6-2 win.

Nadal is here with his sights on equaling his friend and rival Roger Federer record of 20 Grand Slam titles as he has been largely considered favorite to land this rescheduled French Open Grand Slam event to make it his 13th men’s French Open title in his very illustrious tennis career. He started the 1st set a bit slow but remarkably converted all his 5 break points when it mattered the most to cruise to the 3 straight set wins at Roland Garros.

Gerasimov also managed to bring the game to Nadal and didn’t  lie down and get rolled over as he broke Nadal’s serve twice, he was momentarily leading 2-0 in the 3rd and final set as he struck 24 winners, 8 aces in the process and the 28 unforced errors but Nadal was obviously stronger and more precise with his powerful shots all through the match and was not giving any room for slip up as he won the match convincingly.

With the win, ” the king of Clay” earned a second round match up with American Mackenzie McDonald.

In other French Open 1st round match ups, newly crowned US Open Champion Austrian Dominic Thiem was playing in his first Grand Slam match since winning the US Open few weeks ago as he was dominant over another former Us Open 2014 Champion Croatian Marin Cilic winning in 3 sets 6-4, 6-3, 6-3.

Thiem would now be squaring up against American Jack Scot in the next round, Scot did well to defeat another fellow American Reilly Opelka 6-4, 6-4, 6-3 in a one sided 3 set match to earn a date with Thiem.

Apart from Murray crashing out in the 1st round, we have had another major upset at the Roland Garros as the world number 5 ranked player Medvedev was shockingly dumped out 6-4 7-6 (7-3) 2-6 6-1 by the Russian Marton Fucsovics.