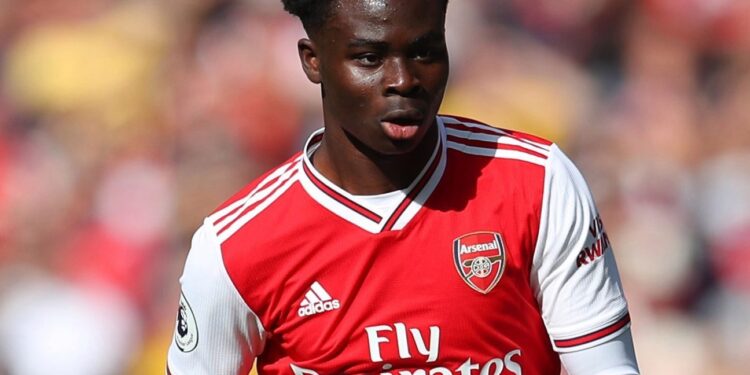 Arsenal Midfielder, Bukayo Saka, has affirmed that he would continue to play for the English National team, refusing offers from Nigeria football officials to switch allegiance and play for the Super Eagles.

It was reported, Thursday, that the 19-year-old and two others were given maiden call-ups to the English National team ahead of their UEFA Nations League games against Wales, Belgium, and Denmark.

Saka in an interview with SkySports reiterated that while he remained proud of his Nigerian heritage, he was better disposed to playing for the Three Lions than the Super Eagles.

“I feel like I’m really, really proud of my Nigerian heritage,” Saka told Sky Sports. “I always, still, watch Nigeria’s games where I can and I wish them all the best and support them all the way, but I’ve seen the process of how England are transforming and I think in the future they’re going to do great stuff.

“I feel like it was right for me to choose England.”

Saka, who was born in England, is very grateful to his parents whom he credits for his fledgeling football career.

“My dad was born here, my mum was born in Nigeria, but they both grew up in Nigeria and met each other in Nigeria,” he added. “They came over and when they came to England it wasn’t easy for them because obviously, it’s a new country.

“It’s really cold for them, but they adapted well, and as soon as they had me and my brother, they always left everything out the way and put us first.

“Especially my football career, my dad always pushed me, he took me to training on days where sometimes it would take two hours to get to training, so I’ll always be so grateful for my parents for the work they’ve done for me.”

Saka has been delivering outstanding performances for the Emirates Stadium giants since his promotion to the first team and many are waiting to see how he would fare with the Three Lions.

Though Nigeria may have lost out on Saka, more players in diaspora are switching their allegiance to don the country’s Green and White colors.

The Super Eagles have lined up two friendlies against Algeria and Tunisia on October 9 and 13 respectively as part of their preparation for their Africa Cup of Nations qualifiers against Sierra Leone in November.

As many as seven players are in line for a debut appearance with the Super Eagles in this double friendly.