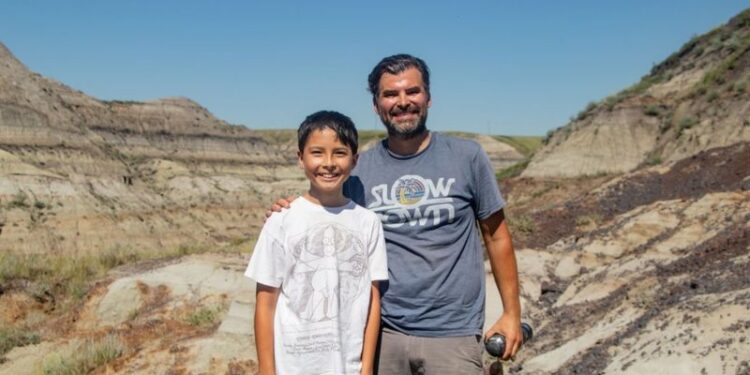 A 12-year-old boy made the discovery of his lifetime when he found a dinosaur skeleton dating back 69 million years.

The amateur palaeontologist was out hiking with his father in a fossil-rich part of Alberta, Canada this July, when he saw bones protruding from a rock.

On Thursday, the skeleton’s excavation was completed.

The boy, Nathan Hrushkin, says when he first laid eyes on the bones, he was “literally speechless”.

“I wasn’t even excited, even though I know I should have [been],” he tells the BBC.

“I was in so much shock that I had actually found a dinosaur discovery.”

Nathan, who has been interested in dinosaurs since he was six, often goes hiking in the Nature Conservancy of Canada’s protected site in the Albertan Badlands with his father.

“I’ve always just been so fascinated with how their bones grow from bones like ours to solid rock.”

A year ago, they had found small fragments of fossils, and his father guessed that they were falling down from the rock above.

So this summer Nathan decided to inspect. The fossilised bones were growing out of the side of a hill.

“Dad you got to get up here!” he called to his father.

His father knew by the tone of his voice that Nathan had found something.

“They literally looked like bones made of stone – you could not mistake them for anything else,” his father, Dion Hrushkin, said.

“It looked like the end of a femur, it had that classic bone look to it, sticking straight out of the ground.”

Nathan knows that the fossils are protected by law, so when they got home, they went to the website for the Royal Tyrrell Museum, which is located in Alberta and devoted to the study of prehistoric life. The museum told them to take send photos of the discovery and its GPS coordinates, which they did.

The Badlands are home to many fossils, and a dinosaur – named the Albertosaurus – was discovered by Joseph Tyrell in the late 1800s. But the part of the conservation site where they were walking was not known for fossil discoveries, so the museum sent a team of experts to excavate.

So far they have found between 30 and 50 bones in the canyon’s wall, all belonging to one young Hadrosaur, estimated to be about three or four-years-old.

“But after my discovery, it’s most definitely the Hadrosaur.”

The dinosaur is scientifically significant, the museum says, because the fossil is about 69 million years old, and records from that time period are rare.

“This young Hadrosaur is a very important discovery because it comes from a time interval for which we know very little about what kind of dinosaurs or animals lived in Alberta. Nathan and Dion’s find will help us fill this big gap in our knowledge of dinosaur evolution,” the museum’s palaeo-ecology curator, François Therrien, said in a statement.

Nathan says he’s enjoyed learning more about dating dinosaur bones, and that the whole process has been “surreal”.

“It’s going to be great to see them, after months of work, finally take something out of the ground,” he says. 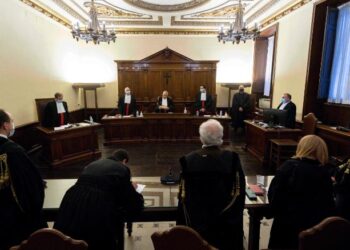 The former head of the Vatican bank, Angelo Caloia, has been sentenced to nearly nine years in prison for money...