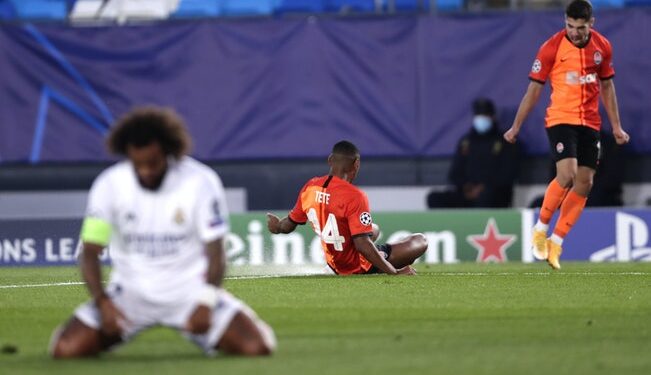 The most prestigious football competition in the world of football returned Tuesday night with group games in all the 8 groups and there were routine wins as expected for most of the top teams with a few upsets here and there, here are my summary of some of the top games.

The 1st leg of match day one group H fixture between English giant Manchester United and last season’s finalist PSG went down Tuesday night in Paris, and Ole Gunnar Solskjaer marked an impressive return to the champions league with a 1-2 win over their host at the Parc Des Princes. Bruno Fernandes had gotten united ahead in the 24th minute from the spot in usual fashion, his initial kick was saved by PSG goal keeper, former Madrid goal keeper, Keylor Navas, but it was cancelled by the referee, Spanish referee Antonio Mateu Lahoz, who ordered a replay after Navas was found to have stepped over the line. Fernandes didn’t miss at the replay and United were ahead as early as the 24th minute.

United player, Anthony Martial was in the goals again in the 55th minute, as he headed the ball beyond his own goal keeper David De Gea to gift PSG a goal to level matters to 1-1. It stayed that way to the closing stages of the match until 3 minutes from regulation time, the 87th minute when Marcus Rashford found the bottom corner of Keylor Navas’s goal to steal the win for United  in a match where Thomas Tuchel’s men looked largely unconvincing and a bit sloppy in the middle of the park and allowing United to have control on proceeding, a very well deserved win for United to kick start their campaign in Europe  on their return to Champions league action which they missed out on last season.

Barcelona gave a dominant display over Hungarian team Ferencvaros in their opening group G 1st leg match at home at the Camp Nou. It was baptism of fire for Hungarian team in their return to Champions league action. Barca were at their imperial best as they saw off their opponent. Messi got the 1st goal from the spot in the 27th minute to break the Ferencvaros resistance and opened the curtain for the 17-year-old Barca youngster Ansu Fati who got a sublime second goal on the night just before the half time in the 42nd minute.

Ronald Koeman‘s Champions league debut as a coach for Barcelona  continues in impressive form as Phillipe Coutinho made it 3 in the 52nd minute, but the Catalans were reduced to 10 men in the 68th minute as Gerard Pique got his marching orders for a tug on the shirt of Ferencvaros Striker Tokmac Chol Nguen and a penalty was also awarded, the penalty was converted by Igor Kharatin to make it 3-1 in the 70th minute.

Barca would later cap up a brilliant night of Champions league football with two more goals to seal it off as late goals from Pedri in the 82nd minute and Ousmane Dembele in the 89th minute just before regulation time ensured a very convincing performance in the opening match of the group stage for Barcelona.

CHELSEA AND SEVILLA STALEMATE AT THE STAMFORD BRIDE.

Chelsea were held at home at the Stamford bridge by a very compact Sevilla side in their opening group E 1st leg encounter. A very lively 90minutes for the neutrals saw both side laboured to no avail and both teams could not find a way past each other in a very high intensity match in London at the Stamford bridge.

Sevilla were better overall in terms of possessions, but Chelsea had 1 more shot on goal than their Spanish Europa league Champion opposition on the night in a highly frustrating match as both teams could not find the back of each other’s net.

Frank Lampard gave a Champions league debut to Edouard Mendy and was very impressive in goal making crucial saves and looked the part in goal for Chelsea, a breath of fresh air for the London side who have had to deal with their error prone Kepa Arizabalaga in goal lately.

The other fixture in Group F saw French side Rennes play a 1-1 with FC Krasnodar.

Andres Pirlo and his Juventus side got up to a winning start in the Champions league in their opening group G 1st leg match against Ukrainian side Dynamo Kyiv at their home stadium at the Stadion NSK Olimpiyskiy, Kyiv.

Alvaro Morata marked his return to the ”old lady” with a 1st half  added time 46th minute goal to put his side ahead  as he  stepped up yet again in the absence of Cristiano Ronaldo who is out with COVID-19. He got the 2nd goal of the night again in the 84th minute to make it a 2-0 win away from home to earn Andres Pirlo his 1st ever win as a manager in the Champions league.

Borussia Dortmund with tier array of young exciting stars were stunned by Italian side at home at the Stadio Olimpico, in Rome on Tuesday night at their opening 1st leg Group F match. A 6th minute goal from Italian Striker Ciro Immobile and a moment of blunder from Dortmund goalkeeper Marwin Hitz who scored an own goal into his own net in the 23rd minute ensured that the Italian side were on top at home in the 1st half and it was followed.

Erling Haaland was on the score sheet in the closing stages of the game as he halved the deficit for  Dortmund in the 71st minute,  but the home team would have the final say as they got the 3rd goal shortly afterwards against the run of play in the 76th minute courtesy of a Jean-Daniel Akpa-Akpro goal and it ended that way as Lazio got their Champions league season to a winning start at the expense of BVB.

The other Group F fixture saw Club Brugge winning 2-1 away from home over Zenith St. Petersburg.

On day 2 of match day 1 in the UCL, Actions continues.

Bayern Munich kicked started their Champions league title defence on an emphatic note on Wednesday night at home at the Allianz Arena as they defeated Atletico Madrid 4-0 in their opening Group A match up. Bayern scored 2 goals in each half as they outclassed Diego Simeone‘s men to grab all 3 points from the opening fixture.

A 28th minute opener from Kinsley Coleman set up the tone for the Han Dieter Flick‘s men and that was doubled by Loen Goretzka in the 41st minute and it ended that way in the 1st half.

Bayern were back in their dominant best and sealed the game in the second half. A Corentin Tolisso shot from out the area made it 3 nil in the 66th minute and Kinsley Coleman completed his brace in the 72nd minute to complete a 4-0 win for the defending Champions.

The Other Group A fixture saw Salzburg and Locomotiv Moscow play out a 2-2 draw.

Perennial Champions of the Champions league, Real Madrid were below par at their opening game of the Group stages as they fell at home at the Alfredo Di Stefano Stadium to Shakhtar Donetsk on Wednesday evening.

Madrid fell behind 2 goals down at home as early as the 1st 33 minutes of the match from goals from Tete and an own goal from Raphael Varena, Shakhtar were the better team for majority of the half and they got yet another goal in the 42nd minute from Manor Solomon to make it 3 nil for the Ukrainians before the half.

Madrid would however crawl back into game in the second half through a 54th minute Luca Mordic goal in a half which saw them insert some kind urgency in their play and were desperate to get back into the game and expectedly started to dominate the game slightly in terms of possessions and chances created. Junior Vinicius got the second of the night for Zinedine Zidane‘s men and that’s how it ended, as Shakhtar handed Madrid its first loss despite Vinicius Junior putting the ball in the net later on but the goal was disallowed by VAR as he was found in an offside position.

In another Group B Fixture, Inter and Borussia Monchengladbach played out a 2-2 draw at the Giuseppe Meazza Stadium in Italy.

Pep Guardiola’s Manchester City were back in action in  the Champions league for their group C opener at home at the Etihad stadium against Porto on Wednesday night and they came out with all three points at the end of the match despite falling back as early as the 12th minute when Luis Diaz got the opener for Porto to make it 1-0, City’s reply came in the 20th minute through a Sergio Aguero well taken penalty after Pepe had brought down Raheem Sterling in the area to earn a penalty.

City were bossing proceedings, dominating most of the possessions and creating  majority of the chances but not finding the back of the net until much later in the second half in the 65th minute when Ike Guendogan put his team in front  as he made it 2-1, a very well deserved goal considering the amount of possessions they enjoyed in the game.

Ferren Torres got the 3rd goal to seal the game for Manchester City as they got their Champions league quest to an impressive start.

In another Group C fixture, Olympiacos prevailed over Marseille 1-0 at the Karaiskaki stadium in Greece.

2019 UEFA Champions, Liverpool were back in action on Wednesday evening as they played their opening group D match against Ajax at their home ground at the Johan Cruijff Arena in Amsterdam.

A 35th minute own goal by Nicolas Taglifico was all that separated the two perennial winners of the Champions league at the end of the match as Liverpool got up to a winning start in the competition.

In other group D fixture, Atalanta were emphatic away from home as they thump FC Midtjylland at home at the MCH Arena 4-0