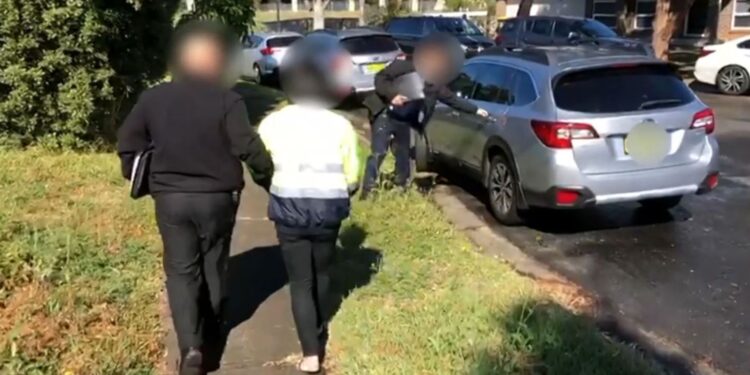 The suspects face a total of 350 charges between them of possessing child exploitation material. Pic: Australian Federal Police

Arrests of all the suspects, aged 19 to 57, were made in every Australian state, except the Northern Territory.

Australian police have arrested 44 men and rescued 16 children from across the country as part of a year-long nationwide investigation into child abuse.

Arrests of all the suspects, aged 19 to 57, were made in every Australian state, except the Northern Territory.

The accused face a total of 350 charges between them of possessing child exploitation material, the Australian Federal Police (AFP) said.

Those detained allegedly used a cloud storage platform to share the abuse, which the AFP described as “the most abhorrent produced”.

Eleven suspects were arrested in Queensland, eight in New South Wales, 11 in Victoria, nine in South Australia, two in Tasmania, one in Australian Capital Territory and two in Western Australia.

They worked in a range of industries including construction, transport, law enforcement and hospitality.

Some of the alleged offenders, who are also accused of producing their own child abuse material online, were allegedly in possession of material that was produced by a man arrested by the AFP in 2015 under Operation Niro, which resulted in the dismantling of an international organised paedophile syndicate.

Sixteen children were “removed from harm” in the latest crackdown under Operation Molto, an ongoing investigation, involving hundreds of police and specialists across Australia.

“Pixel by pixel, our investigators painstakingly look for clues and never give up and the tools they use give Australian police access to world leading expertise,” he said.

“Viewing, distributing or producing child exploitation material is a crime. Children are not commodities and the AFP and its partner agencies work around-the-clock to identify and prosecute offenders.”

A total of 134 children have been rescued between July 2019 and June 2020, the AFP said, including 67 internationally, as a result of its investigations.

Burna Boy: End SARS protests are 'the most important moment in Nigeria's history'