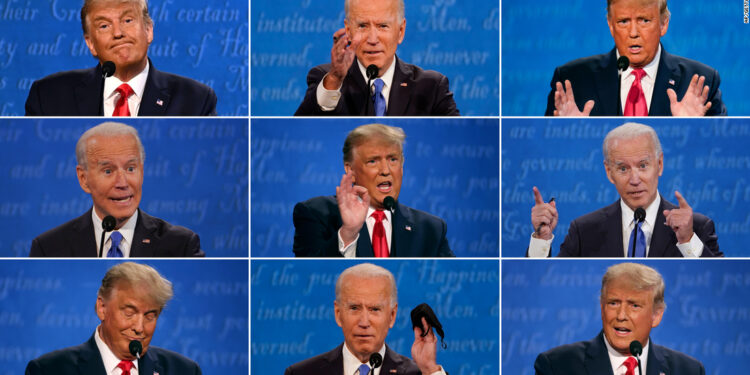 President Donald Trump and former Vice President Joe Biden held an actual debate on Thursday night in Nashville, Tennessee — the final time the two candidates will share the stage before the November 3 election.Unlike their first debate last month, the two candidates actually engaged one another (generally speaking) on issues, led skillfully by debate moderator Kristen Welker.Below, the best and worst of the night that was.

* Joe Biden: The former vice president wasn’t perfect. But he did everything he needed to, given his pole position in the race — and even managed to land the best lines of the night. On the coronavirus, Biden mocked Trump’s line that “we’re learning to live with it” by saying, “We’re dying with it.” After an extended back-and-forth over their families and allegations of corruption, Biden turned to the camera and said: “It’s not about his family or my family. It’s about your family.” And when the debate turned to race, Biden got this line off about Trump: “This guy has a dog whistle as big as a fog horn.” Those are the lines likely to be replayed again and again in the post-debate coverage — and that’s a good thing for Biden. But it wasn’t all good: Biden’s answers to Trump’s attacks on why he didn’t get more done on immigration or race relations during his eight years as vice president were weak. (Biden blamed the Republican-controlled Congress.) And particularly toward the end of the debate, Biden seemed to flag somewhat — losing his train of thought and misspeaking at times. Biden will never be a great debater, and he wasn’t *on* on Thursday night. But he did enough — more than enough — to keep the race roughly right where it is. Which is with him as a clear favorite to win on November 3.

* Kristen Welker: There’s no question that the NBC White House correspondent was the most effective moderator of this debate season. (I am including both the other presidential debate as well as the VP debate.) She refused to be bullied by Trump or let either candidate talk over her for any extended period of time. She stuck to the questions she wanted to ask — which included difficult ones for Trump (his taxes) as well as Biden (his involvement in the 1994 crime bill). Welker was helped by the muting of the candidates during certain portions of the debate — not to mention their clear fear of being muted for interrupting. And Trump was far less bellicose in this debate than he was in the first one last month. Nonetheless, Welker expertly played the hand that she was dealt. She didn’t draw attention to herself or make herself an issue in the debate. And she delivered, for the most part, an actual debate on the issues between the two candidates for president.

The mute button: It wasn’t used as much as partisans on either side had hoped, but there is NO question the fear of suddenly having your mic turned off worked as an effective deterrent for both Trump and Biden. Can we make this a permanent feature of debates going forward?

* Alexandria Ocasio-Cortez: Not only did Trump mention the freshman Democratic congresswomen — by her initials only! — on several occasions, but he also said “she’s got a good line of stuff.” And, no, I have zero idea what the heck that means.

* Abraham Lincoln: The Great Emancipator still has his crown as president who did most for Black Americans, at least according to Donald Trump. Second on that list? Well, Donald Trump, of course.

* Donald Trump: The President was significantly better in this debate than in the first one in late September. He had clearly been convinced by his campaign aides (or someone) that his constant interruptions in the other debate were disastrous for him politically and that he needed to be on his best behavior. And Trump tried to do just that. He complimented Welker at one point for how well she was moderating the debate — a pre-planned move if ever I have seen one — and for much of the first hour, he displayed a level of message discipline that he has rarely been able to stick to during his presidency. His attacks on Biden’s long tenure in politics were effective, as were his repeated reminder that Biden has been vice president for eight years and hadn’t done, in Trump’s estimation, all that much. So why is Trump in the “misses” category then? Three reasons. Number one: He is behind and needed to use this debate to alter the course of the race. He did not do that. Number two: Trump wasn’t able to hold the quasi-presidential tone together for the entire debate. By the end he was talking about how he was the “least racist person” in the building and insisting that he knew more about wind than Biden. Number three: He just said so, so many false things. (More on that one below.)

* Truth: From his very first answer of the debate, in which he said more than 2 million Americans would have died if he hadn’t taken such swift action on the coronavirus — that number was the estimated death toll of NO mitigation had occurred — to his very last answer about how 401ks will collapse if Biden is elected president, Trump showed a remarkable disdain for facts and the truth. “From a lying perspective, Trump is even worse tonight than in the first debate,” tweeted CNN fact-checker Daniel Dale. To be clear: Trump’s willingness to exaggerate, mislead and flat-out lie isn’t going to change many minds about him — for good or bad. But facts and the truth still matter. And they had a ROUGH night on Thursday.

* Climate change: Ask any scientist what the most urgent issue of our time is and they will, almost to a person, tell you that it is the warming of the Earth. Given that, it felt like climate change should not have been the final topic of the debate — shoehorned into the last eight minutes, as Welker rushed to wrap it all up in something close to 90 minutes. And the brief answers the candidates — especially Trump — gave on the issue were pretty close to embarrassing. “We have so many different programs,” Trump said when asked about the warming climate. “I do love the environment.” Uh huh.

* Liberals: The left had to be disheartened not only by Biden’s insistence that he will never move to ban fracking but also by his retort to Trump’s attacks on being beholden to the policies pushed on him by liberals in his party. “I’m Joe Biden,” Biden said. “I beat all of them.”

* Trump’s Biden impersonation: On two occasions over the 90-ish minutes, the President attempted an impersonation of Biden. (Both times were to claim that Biden had said he would ban fracking.) Neither attempt was very good. And while we’re on the subject, Woody Harrelson’s Biden is 1,000 times better than Jim Carrey’s.