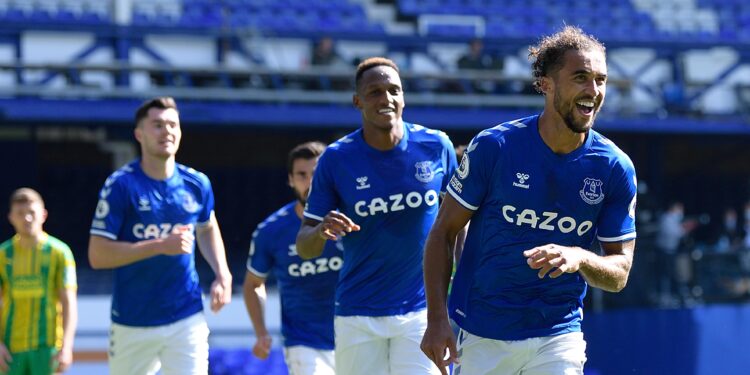 Match Day 6 actions in our favorite English Premier League kicked off on Friday 23rd October as Aston Villa hosted Leeds United at the Villa Park and at the end of the game it was Leeds United who were impressive away from home to grab the win, winning 0-3 at the Villa Park to set the tone for an exciting weekend of football in the Premier league. Here is my review of some of the weekend games.

WESTHAM HOLD ON TO A 1-1 AGAINST MANCHESTER CITY

West Ham has been grinding out a couple of decent result since the commencement of the season and it was an impressive weekend yet again as they hosted Manchester City at home at the London Stadium. Expectedly, it was Pep Guardiola’s men with the bulk of the possessions in the early stages of the match, but it was the Hammers who got quickly out of the blocks as against their run of play. Vladimir Coufal  floated in a cross from the right and it was met by Michail Antonio who connected the ball with an overhead ‘bicycle kick’ to shot his team in to the lead inside the 1st 18 minutes of the game. City tried to quickly get back into it but met a really organised West Ham defense most times they surge forward and it was Riyah Mahrez who got a shot on target in the 25th minute but was well covered by Lucaz Fabianski in goal for Dayid Moyes’s side.

City dominated the rest of a very drab 1st half but couldn’t find the back of West Ham’s net.

The Cityzens got up to business early in the second half as they got an equaliser 5 minutes into the half as  Phil Foden who was a second half replacement for the below par Sergio Aguero, quickly got in on the action as he made a swift turn after receiving a cross from Joao Cancelo and he did well to bury the ball beyond Fabianski  to level it 1-1. It was such a nice way to start the half for City as they threw everything at West Ham to try to get ahead in the game but it was not to be.

Kevin De Bruyne was brought into the action in the final 20 minutes of the game, replacing Benardo Silva and inclusion was timely as it gave City more drive going forward but all their effort was met by a firm West Ham defence and Lucaz Fabianki was having a good day in goal denying Raheem Sterling in a one-on-one situation and moments later also denied Mahrez again to earn a point for his side at home.

Manchester United were host to visiting Chelsea on Saturday evening as it was a fixture everyone was waiting for with lots of expectations, but didn’t live up to the billing as it ended in a baren draw at the end of the game as both sides couldn’t find a way past each other. The Red Devils were forming from the back on an impressive mid-week match day one opening group game 1-2 victory away in Paris against PSG on their return to Champions league and they came up against a Chelsea side that played a goalless draw at home against Sevilla in the UCL.

A very cagey 1st 45 minutes saw Ole Gunnar Solskjaer‘s side with the best chances of the half despite Chelsea having the slight edge in terms of possession. Chelsea’s new goalkeeper signing from Renne, Edouard Mendy who got the nod from Frank Lampard to make his Champions league  debut and was impressive against Sevilla, was the preferred choice to start against United as  he was called into action to make an important save in the 35th minute to deny Marcus Rashord what could have been a goal .

There was no separating these two sides in the 1st half and second half also, after the closest United got again was Edison Cavani hitting the side netting with a well taken shot in the 59th minute, moments after coming on as a substitute replacing Daniel James.

It ended in a stalemate as both sides settled for a point in this one.

In other Premier league Saturday fixtures, Crystal Palace where visitors at the Craven Cottage home of Fulham and they came out with all 3 points at the end of the match, as goals from Jairo Riedewald in the 8th  minutes and Wilfred Zaha 63rd minutes goal  saw off a 10 man Fulham as Aboubakar Kamara saw a red card in 88th minutes and an additional time goal from Tom Cairney was a consolation for Fulham as the Eagles came away with all 3 points at a local derby in London.

Champions Liverpool were also in action at home in Anfield, a late kick off on Saturday against Sheffield United. A penalty goal from  Sander Berge had gotten the home side ahead in the 13th minute but Liverpool came back just before the half through a Roberto Firminho equaliser and then a 60th minute second half  header from Diogo Jota was all it took to seal all 3 points for Jurgen Klopp’s team to take them up to second on the log level on 13 points with Everton, with a superior goal difference.

Sunday fixtures in the EPL.

EVERTON STUMBLED AWAY 2-0 TO SOUTHAMPTON AT THE ST MARY

Everton have had a near perfect start to the Premier league season and it was brought to an end Sunday afternoon at the St Mary Stadium. Their unbeaten start to a season was halted in a 0-2 defeat to Southampton.

Carlo Ancelotti’s side started the better side bossing the possession and making all the  forward runs, but it changed soon as Southampton grew into the game and deservedly  got the 1st goal in the 27th minute as James Ward Prowse was at the end of nice interchange of passing move with Danny Ing as Prowse made it 1-0 and soon afterwards in the 35th minute mark, Everton would find themselves trailing by 2 goal as Danny Ings was the provider yet again as he played a ball through to Che Adams who made no mistake as he beats Jordan Pickford in goal for Everton to double the advantage for Ralph Hasenhuettl’s men.

Everton were reduced to 10 men in the closing stage of the game after Lucas Digne was sent off for a nasty challenge on Southampton defender Kyle Walter Peters with less than 20 minutes to play and there was no way back into the game as it was end to end game till the end of the match.

Everton remained top of the log in the Premiership, level 13 points with Liverpool, but with a better +5 goal difference.

In other Sunday fixtures in the EPL, Wolverhampton Wanderers and Newcastle United played out a 1-1 draw at the Molineux Stadium.

Arsenal hosted Leicester City at the Emirates Stadium at the late kick off on Sunday evening and it was “substitute” Jamie Vardy ‘s 80th minute goal that separated the two sides as Arsenal have come out with no points in their last two premier League games.

Brighton and Hove Albion would be taking on West Brom Albion at their home at the Amex Stadium and Burnley would be hosting Tottenham Hotspur at the Tuff Moor.