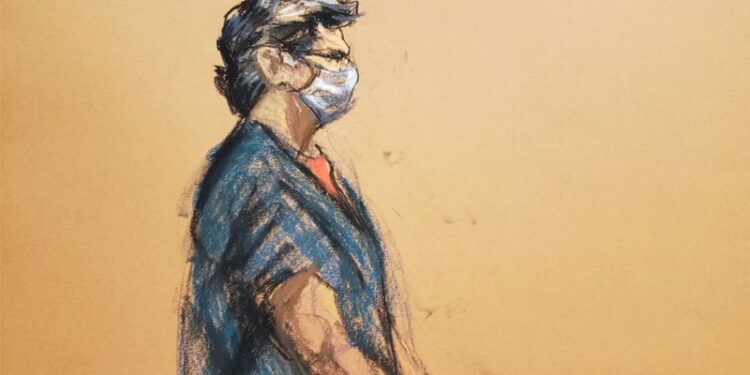 Keith Raniere was sentenced in a Brooklyn court on Tuesday

The US leader of a sex cult has been sentenced to 120 years in prison.

As leader of the group he recruited women as slaves and forced them to have sex with him.

Prosecutors said the 60 year old should spend his life behind bars for the “immeasurable damages” he caused to victims of the cult.

Raniere himself never took the stand during the case last year. He was the only member of Nxivm’s leadership to face trial as others took plea deals.

His lawyers have maintained his innocence throughout and have blamed a “media campaign involving witnesses who were motivated to testify falsely” for his conviction.

US authorities began investigating Nxivm – pronounced nexium – after the publication of a New York Times investigation in 2017.

Based in Albany, New York and created in 1998, the group described itself as a “community guided by humanitarian principles that seek to empower people”.

According to its tagline, the organisation is “working to build a better world”. It says it has worked with more than 16,000 individuals and operates centres across the US, Canada, Mexico and Central America.

But in reality Raniere sat at the top and controlled female members through a slave and master system. Some women were branded in their pelvic areas with Raniere’s initials in filmed ceremonies, while members would gather each year to celebrate and pay for his birthday – an event known as “Vanguard Week”.

The cult membership reportedly included Hollywood actresses, heiresses and even the son of a former Mexican president – some of whom testified against Raniere in court.

In 2018 FBI agents arrested Raniere in Mexico after he left the US following the New York Times report.