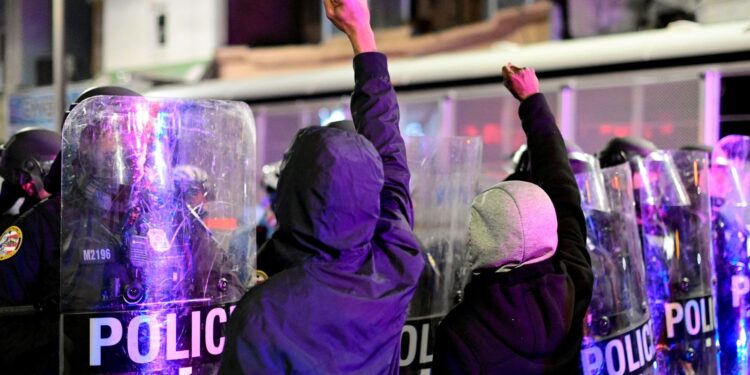 Protesters marched through the streets chanting the victim's name

The family of Walter Wallace Jr have criticised the violence that has erupted amid the protests.

A second night of unrest has unfolded in Philadelphia after a black man was shot dead by police officers.

Footage of the shooting shows Walter Wallace Jr, 27, being fired at several times by police after they yell for him to drop a knife.

The father-of-nine’s family had called for an ambulance rather than the police to get him help with a mental health crisis, their lawyer said.

Shaka Johnson, representing the family, said officers knew Mr Wallace was in a mental health crisis because they had visited the family home three times on the day he was shot.

About 500 people gathered in a West Philadelphia park on Tuesday night and began marching through the neighbourhood in protest.

The group marched peacefully for much of the night, chanting Mr Wallace’s name.

But when the group encountered a handful of officers near a police station, several in the crowd threw rocks, light bulbs and bricks at the officers.

Video showed some people looting shops and there were various reports of arrests in other parts of the city at around 9pm local time.

The Philadelphia Office of Emergency Management urged residents to remain indoors, and police and the National Guard were deployed.

A second night of unrest had been anticipated after more than 90 people were arrested and 30 police officers injured during protests beginning on Monday night.

Mr Wallace’s family have criticised the violence and looting, with his father Walter Wallace Sr saying: “I hope people show my family and the city some kind of respect… it’s uncalled for. It really is.”

State and local officials have called for a transparent investigation into Mr Wallace’s death and the release of body camera footage from the two officers who fired their weapons.

Philadelphia police commissioner Danielle Outlaw confirmed neither officer had a Taser at the time of the shooting, but said she was still reviewing what information could be made public – including whether officers were aware of a possible mental illness.

Chief police inspector Frank Vanore confirmed police had received a call about a man screaming and saying he was armed with a knife.

The officers fired at least 14 shots at Mr Wallace, but it is not clear how many times he was struck.

Mr Wallace Sr said he is haunted by the way his son was “butchered”. Philadelphia mayor Jim Kenney had said video of the shooting “presents difficult questions that must be answered”.

It is the latest killing of a black person by US police after months of Black Lives Matter protests, sparked initially by the death of unarmed man George Floyd.

Mr Wallace’s wife, Dominique, is pregnant and scheduled to have her labour induced on Wednesday.