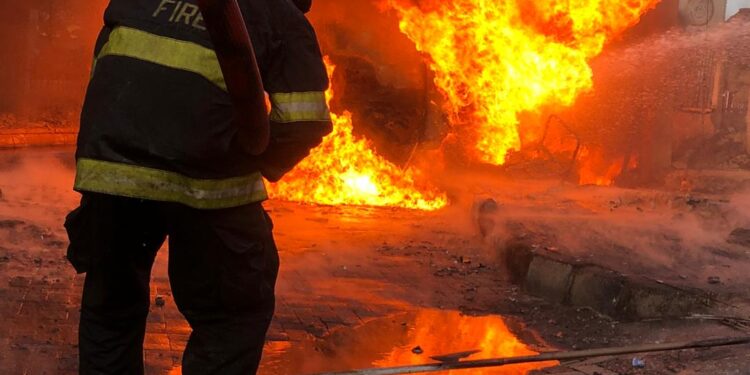 A petrol-laden tanker has been gutted by fire at the Lacasera area of Mile 2, Lagos State.

Some vehicles around the premises were also reportedly razed by the inferno on Thursday.

The driver was said to be conveying the petrol to a destination in the state when he lost control of the vehicle.

It was learnt that the truck overturned, resulting in a spillage that reportedly burst into flames.

The spokesperson for the state Fire Service, Jamiu Dosunmu, said the fire had been extinguished, adding that the no death was recorded.

The Director-General, Lagos State Emergency Management Agency, Olufemi Oke-Osanyintolu, said some stationary trucks were also affected during the fire incident, adding that efforts were on to evacuate the burnt truck from the road.

Oke-Osanyintolu said, “The Agency received distress calls concerning the above which occurred around 1a.m and activated its emergency response plan.

“On arrival, it was discovered that a fuel tanker loaded with PMS had overturned and burst into flames due to the oil spillage. This in turn affected some stationary trailers parked inwards Apapa.

“Operation to remove the affected vehicles is ongoing while road users are encouraged to use alternative routes.”