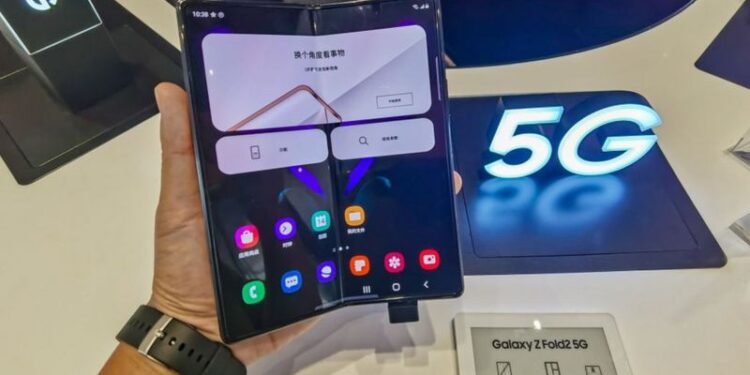 Samsung Electronics has reported record revenues of $59bn (£45.4bn) in its third quarter.

The strong revenues were fuelled by a 50% jump in smart phone sales, while profits from microchips rocketed 82%.

The Korean tech giant posted a third quarter net profit of $8.3bn, a 49% increase over the same period last year.

Samsung’s mobile and chip businesses were likely boosted by US sanctions against its Chinese rival Huawei.

The increase in sales likely reflects Samsung eating into Huawei’s market share as US restrictions hit the Chinese telecommunications giant.

Huawei has been stockpiling chips ahead of possible US sanctions.

In August, the US department of commerce said it would impose sanctions on any foreign company that sold chips to Huawei without first obtaining a license.

The Trump administration has targeted a number of Chinese technology firms over national security concerns, including Huawei, TikTok and WeChat.

Samsung also witnessed strong growth in sales of its premium TVs and appliances during July to September.

Samsung’s strong results come amid a consolidation in the microchip industry in the US.

Microchips have a huge range of applications, and are found in retail products like smart phones and consumer electronics as well as in commercial infrastructure such as data centres.

This week chipmaking giant AMD announced it will buy Xilinx for $35bn, paying a premium for its rival in a near-record deal.

The consolidation has been fuelled by Nvidia and AMD’s surging share prices, which has left them with cash to invest.

Some analysts think a resurgent and consolidating US industry could push the Chinese government to invest more in microchip technology.

“That could lead to an acceleration in research and development. That’s certainly something that we’ve seen happening,” said Natasha Kassam, a Research Fellow at the Lowy Institute.

More broadly, chipmakers have done well throughout the Covid-19 pandemic, as the push to work from home has fuelled demand for certain chips.

In addition to Samsung, Korea’s SK Hynix also reported robust profits in the second quarter as much of the world was subject to Covid-19 restrictions.

US-based Micron Technology also beat its quarterly expectations after predicting a strong bump from the push to work at home in June.

However, Samsung has predicted tougher times ahead, with declining profits in the fourth quarter.

The third quarter figures come out a day after the burial of chairman Lee Kun-hee, who helped turn Samsung into a global powerhouse.

His death could force a shake-up as his heirs might be forced into asset sales or dividend payments in order to pay a massive inheritance tax bill.

There are also lingering questions over his successor, Lee Jae-yong, who has managed the sprawling South Korean technology group since 2014.

Lee Jae-yong has twice been accused of fraud over his role in a 2015 merger deal at the tech giant and is currently awaiting trial.