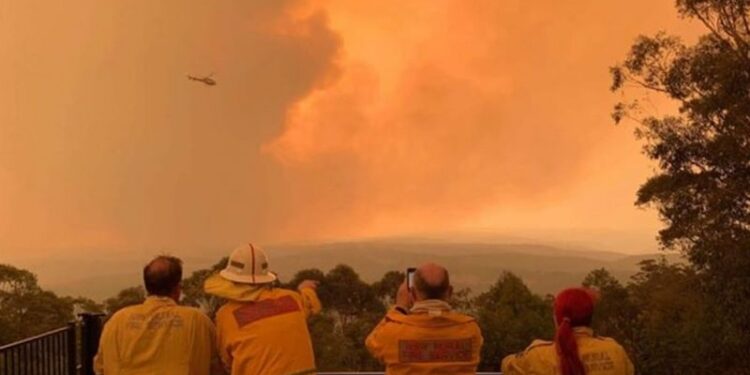 Australia must act to prepare for an “alarming disaster outlook” of simultaneous and worsening natural disasters, says a long-awaited report into the country’s bushfires.

A royal commission inquiry examined Australia’s Black Summer bushfires of 2019-20 – which ravaged vast swathes of the nation – and other disasters.

At least 33 people died in what was by many measures an unprecedented season.

The report made more than 80 recommendations to the government.

They included detailed proposals to improve national response efforts, tools and climate data, among many other areas.

It also reiterated that climate change had exacerbated the extreme conditions which caused the fires, but that future projections were more grim.

The Australian government said it would “carefully and methodically” consider the proposals.

What happened in Australia’s Black Summer?

From July 2019 to March 2020, blazes swept across 24 million hectares of land. It was Australia’s most intense bushfire season on record, though not its most deadly.

One study estimated that hazardous air quality was linked to 445 deaths and had put thousands more in hospital.

The extreme bushfires were often uncontrollable and stretched the resources of state-based fire services, largely manned by volunteers.

The blazes occurred in Australia’s driest and hottest year on record, and followed a prolonged drought. Afterwards, some affected communities also faced intense storms and flooding.

What did the report say?

The Royal Commission into National Natural Disaster Arrangements called for better national co-ordination of responses to such events, calling for the federal government to take earlier intervention.

It warned of Australia’s “alarming” outlook in the coming decades, but that the damage would partly depend on how well authorities prepared.

The commissioners said that “compounding disasters” would become more common – where natural hazards such as fires, floods and storms happen simultaneously, or one after another.

“To properly manage natural disasters of national scale and consequence, it is no longer suitable or appropriate to assess disaster risk at an individual hazard,” they wrote.

“We must assess the risk of multiple hazard events occurring concurrently or consecutively.”

They said global warming would bring more disasters that were “national in scale and consequence”, adding that last summer had “provided only a glimpse of the types of events that Australia may face in the future.”

Some of the recommendations included: