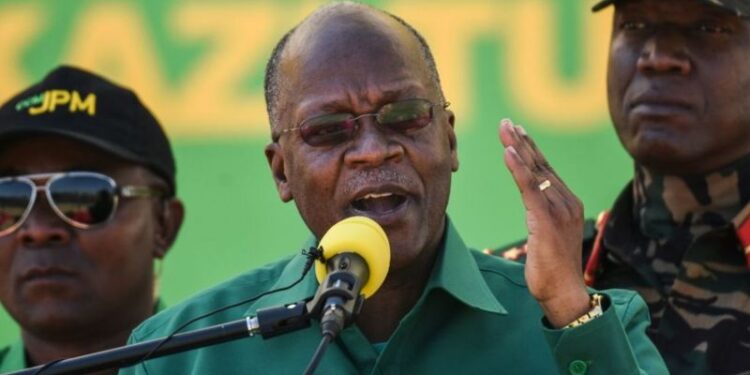 John Magufuli won 84% of the vote, according to the election commission

The Chadema and ACT-Wazalendo parties, in a joint news conference, also called for mass protests from Monday.

Incumbent President John Magufuli was declared victor in Wednesday’s election with 84% of the vote.

Chadema alleges ballot boxes were tampered with after its agents were stopped from entering polling stations.

“We first call for fresh elections as soon as possible,” the party’s chairman, Freeman Mbowe, said on Saturday. “We call for continuous, peaceful, countrywide demonstrations until our demands are met.”

ACT-Wazalendo leader Zitto Kabwe said the decision was for “the future of our country”.

“We cannot accept going back to a one-party system,” he added.

Tundu Lissu – Chadema’s candidate for president and Mr Magufuli’s main rival – won just 13% of the vote. He said on Thursday it “was not an election by both Tanzanian and international laws. It was just a gang of people who have just decided to misuse state machinery to cling to power”.

An observer mission from the East African Community said the election was “conducted in a regular manner” but the US embassy in Dar es Salaam said that “irregularities and the overwhelming margins of victory raise serious doubts about the credibility of the results… as well as concerns about the government of Tanzania’s commitment to democratic values”.

Mr Magufuli has been president since 2015 but his CCM party has been in power since independence in 1961.