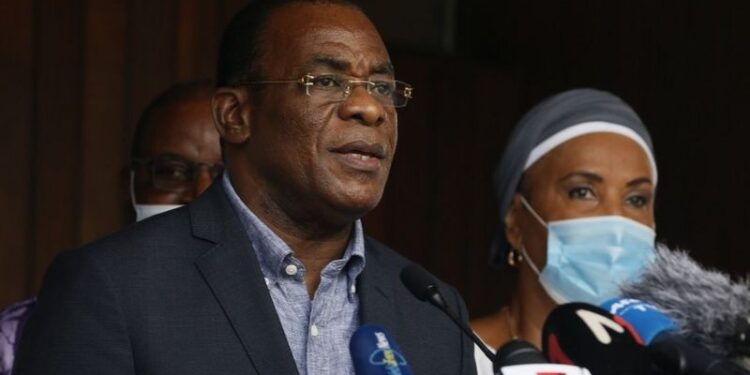 The former prime minister was said to be detained in the town of Akoupe.

His arrest has not been publicly confirmed by Ivorian authorities.

They say he violated the constitution by seeking a third term.

But President Ouattara has defended his decision, saying a new constitution in 2016 restarted his mandate, meaning he could run again. He won 94% of the vote in the 31 October poll.

At least 40 people have been killed in clashes since August, reviving fears that Ivory Coast could spiral into post-election violence.

After announcing a National Council for Transition (CNT) last week, the homes of several opposition leaders in the main city, Abidjan, were blockaded by security forces.

Mr Nguessan ran for president for the Ivorian Popular Front party before announcing a boycott and calling for “civil disobedience”.

He previously served as prime minister from 2000-03 under President Laurent Gbagbo.

Ivory Coast was plunged into a civil war in 2010 after President Gbagbo refused to concede defeat to Mr Ouattara in that year’s elections. More than 3,000 people died in the fighting.

Mr Nguessan’s wife, Angeline Kili, told Reuters news agency that he’d been detained soon after public prosecutors confirmed that police were looking for him. She said she did not know where he was being held.

Genevieve Goetzinger, a spokesperson for Mr Nguessan, said on Twitter that he had been arrested while travelling to his hometown of Bongouanou.

President Ouattara rejected their demands to postpone the vote and hold talks.

He initially said he would stand down but after his preferred successor, Amadou Gon Coulibaly, died of a heart attack in July, he reversed his position.

In a joint statement, the UN, African Union and West African bloc Ecowas have called on all political groups to exercise dialogue and restraint.