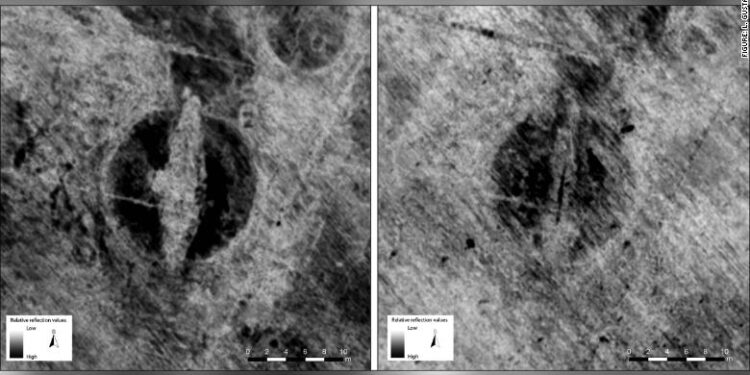 Researchers were able to discover the findings without having to dig into any land, instead using ground-penetrating radar (GPR) to see below the surface.

Key amongst the findings from the Norwegian Institute for Cultural Heritage Research — published Tuesday in the Antiquity journal– is a Viking ship burial site located on the Jell mound in Gjellestad, southeastern Norway. Boats symbolized safe passage into the afterlife and were usually accorded to the elite of Viking society.

The GPR data showed that the Iron Age vessel measures around 19 meters (62 feet)long, with the ship buried between 0.3 meters to 1.4 meters(0.9 to 4.6 feet) beneath the ground’s surface.

“When we’re doing these kinds of surveys, it’s normally just gray and black and white blobs — but this data set is so visually striking,” said lead author of the study Lars Gustavsen, a researcher at the Norwegian Institute for Cultural Heritage Research. 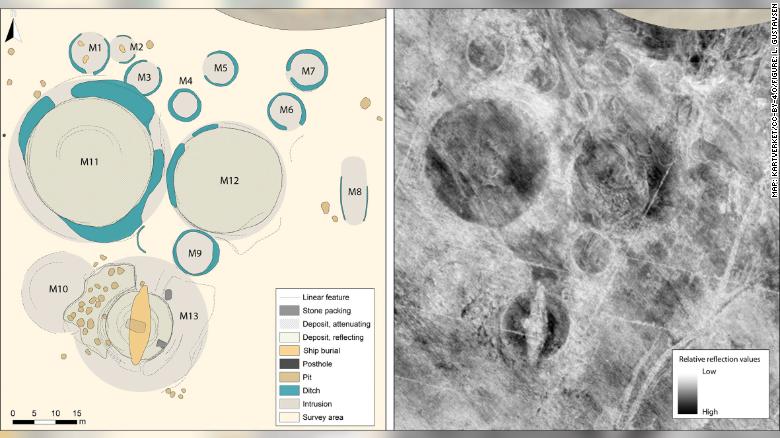 The data shows the various mounds picked up by the radar, including a big oval shaped one that researchers identified as a Viking Age ship.

After initial tests were conducted, efforts to fully excavate the ship are now underway.

Gustavsen said that the mound was previously dug up in the 19th Century, when a lot of the wooden remains of the ship were burned because people were unaware of what they were, meaning there is not a lot left for researchers to analyze today.

“It’s a unique opportunity, it’s just a shame that there is so little left of it,” he said. “What we have to do is use modern technology and use it very carefully. By doing that, we’re hoping that we can capture something from that ship, and be able to say something about what type of ship it was.”

Researchers found several burial mounds beneath the ground; including the ship, they discovered 13 mounds in total — with some measuring more than 30 meters (98 feet) wide.

Several buildings were discovered using the radar data, providing an insight into the lives of those who came before. Researchers identified what they believe to be a farmhouse, a cult house and a feasting hall.

According to Gustavsen, the land, which dates back to the 5th Century AD, was transformed into an elite “high-status cemetery and settlement” during the Viking Age.

Gustavsen hopes to secure more funding to find out more about the surrounding areas. “By doing a larger survey, we can get a more complete picture of Gjellestad, we could describe or explain why it came about and why it eventually failed or went out of use.”

The Late Nordic Iron Age, which lasted from 550 to 1050, saw many key historical events, including the fall of the Western Roman Empire and the rise of the Viking Age. Researchers hope the site may uncover new truths about such a turbulent period.

The discoveries came after surveys were carried out in 2017 to determine if proposed construction plans would damage any archaeological artifacts beneath the ground.

The Jell Mound, the site of the findings, is located at Gjellestad, in the southeastern Norwegian region of Østfold. The mound is widely known as one of the largest Iron Age funerary mounds in Scandinavia.