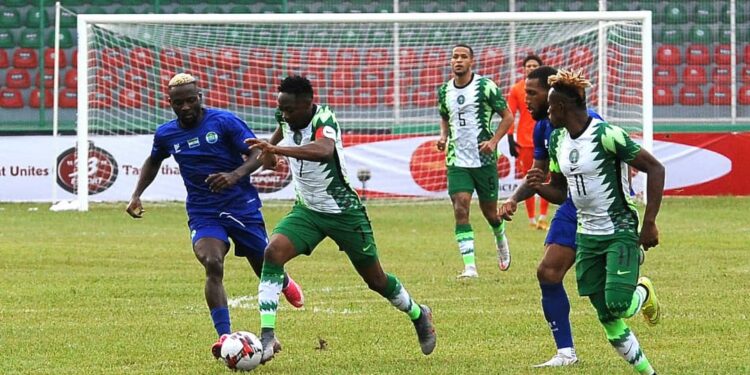 A woeful second half defensive display saw Super Eagles of Nigeria give up a 4-goal lead to draw 4-4 against the Leone Stars of Sierra Leone in the 1st leg AFCON qualifier home match at the Samuel Ogbemudia Stadium in Benin, Edo State on Friday evening.

Sparta Rotterdam goalkeeper Maduka Okoye kept his place in goal as Gernot Rohr decided to stick with the familiar center back pairing of Troost William Ekong and Ranger’s Leon Balogun in the center back pairing with Kevin Akpoguma and Zaidu Sanusi taking up opposite full back positions. Alex Iwobi and the returning duo of Oghenekaro Etebo and Joe Aribo who  both missed out on last month’s friendlies through injuries got the nod to start in the Super Eagles midfield. Victor Osimhen is back leading the line after the Napoli striker missed out of the last two friendlies due to Covid 19 travel restrictions while team captain  Ahmed Musa and Samuel Chukwueze both take their places through the flanks .

Super Eagles started the better side of the two West African Nations as Everton man Alex Iwobi got Nigeria a 4th minute lead to set up the mood for an exciting game as he fired a well taken shot from  the edge of the box giving Mohamed N. Kamara no chance in the Sierra Leone goal, Osimhen doubled the Super Eagles lead on the 21st minute after connecting very well with a header as he heads home from a pin point Zaidu Sanusi’s cross, Iwobi was really in the mood as he completed his brace 6 minutes later in the 27th to make it 3-0 for the home side .

Villareal man, Chukwueze made it a 4 goal lead in the 29th minute for the Super Eagles to cap up a fine 30minutes dominant display. A solo effort which was completed with a strike which ended up on the top left corner of Kamara’s goal was what it took to make it 4-0 in favour of the three-time African Champions

Sierra Leone would however not lie down and be run over as they started what would now be a brilliant come back performance as they got 1 back in the 35th minute through Kwame Quee and it ended 4-1 into the break.

Second 45 continued with Super Eagles having the edge in terms of possessions but where not creating much as the closest they got was a well worked move but Chukwueze was ruled offside at the end of it.

Sierra Leone grew into it and got better in the closing stages as the Nigerian side looked out of ideas and it was time for the Leone stars to apply some pressure of their own and it paid off as they got the second in the 72nd minute through Al-Hadji Kamara to set up a very tense final quarter of the game, two quick goals within 6 minutes in the 80th and 86th minutes by Mustapha Bundu and Al-Hadji Kamara was all it took for the Leone Stars to ensure that the spoils are shared in Benin.

Super Eagles despite a very below par performance still on top of the group with 7 points having gained 6 points from the 1st two matches against Lesotho and Benin Republic in November 2019 when the qualifying series kicked off before COVID-19.

Rohr’s line up looked questionable with the continuous inclusion of Kevin Akpoguma, who looked largely inadequate and does not seem to bring something different to the table as compared to Ola Aina,

The defence got exposed a lot with questions over the defensive abilities of Semi Ajayi who came on for Leon Balogun.

Maduka Okoye shipping in 4 goals on his competitive debut for the Super eagles is something the young goalkeeper would want to forget in a hurry and I think I can fault him for not commanding his area well in the build up to the Sierra Leone second goal.

Ahmed Musa still rusty just like the last game against Algeria with many of his touches letting him down and really didn’t not influence the game as expected.

Etebo is not Ndidi, the trio of Iwobi, Chukwueze and Joe Aribo didn’t do much in the second half as they looked out of ideas.

Super Eagles would be back in action for the return leg away from home in Freetown, Sierra Leone on Tuesday 17th November 2020.