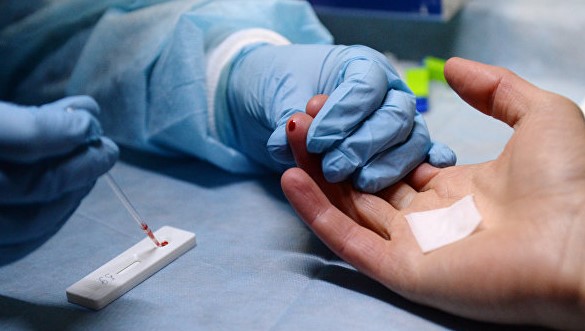 In commemoration of the Y2020 World AIDS Day, the Lagos State AIDS Control Agency (LSACA) has flagged off a statewide HIV/AIDS Testing Service (HTS) exercise across 20 local government areas in the state.

Addressing residents during the flag-off of the exercise at Ijaiye Road, Ogba, in Ifako-Ijaiye LGA on Tuesday, the Chief Executive Officer (CEO) LSACA), Dr. Monsurat Adeleke said the first and pertinent step to eradicating the virus is to get tested.

With this, she said the weeklong testing exercise would hold concurrently in all parts of the state in line with World Aids Day observed every December 1.

“This year, we are using an integrated approach. We are not only testing people to know their status, we are also giving them medication such as Vitamin C to boost their immune system.

“Equally, blood pressures would be checked, while sterilisation kits would be distributed to barbers. Cosmetologists to sterilise their work tools to prevent both the transmission of HIV and COVID-19.”

Speaking on the theme, “United to End AIDS in The Midst of COVID-19: Get Tested”, she emphasised that the battle against the pandemic is not yet over.

Therefore, she tasked residents to observe COVID-19 preventive protocols including regular hand washing with soap and water, use of alcohol-based sanitisers, wearing of face masks, physical distancing, and measuring of people’s temperatures, as mandated by the National Centre for Disease Control (NCDC).

In his remarks, the Medical Officer for Health, Ifako-Ijaiye LGA, Dr. Fausat Oluyombo Sanni, stressed that although HIV/AIDS is no longer a death sentence, the challenge posed by Coronavirus disease has the potential of complicating the situation.

Sanni noted that with massive community HTS exercise, both viruses can be prevented and eventually eradicated

“It is important that everyone knows their status if we must eradicate the disease. Even the Antiretroviral (ART) drugs have preventive measures in limiting the viral load, so that transmission of the virus is abated,” he added.

On her part, the Strategic Intervention Adviser for UNAIDS, Lagos State, Dr. Modupe Oduwole, congratulated the state government for the innovative one-week programme on HTS.

She described the exercise as timely and apt, most especially when global interest dwells more on solidarity and shared responsibilities with partners.

Explaining the UNAIDS 90-90-90 initiative, Oduwole said the first 90 deals with testing to know one’s status, and in the realities of happenings in this regard, Lagos State has continued to be consistent in this direction.

On behalf of the LGA, the Supervisor for Health, Ifako-Ijaiye LGA, Mr. Babatunde Ganiyu, expressed gratitude to the government for such a laudable programme.

He assured them of a massive mobilisation of residents in the grassroots communities for the exercise throughout the week.

The World Aids Day is an annual international day celebrated on 1st December every year since 1988 and dedicated to raising awareness on the AIDS pandemic caused by the spread of HIV infection.