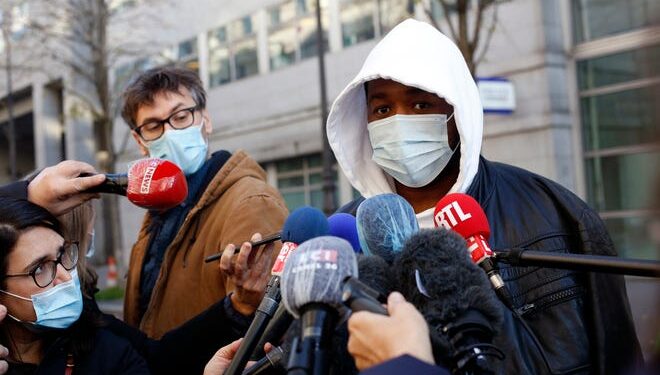 Three of the four are being questioned on suspicion of ‘violence with a racist motive’ after beating of music producer.

French authorities on Friday detained four police officers suspected of beating and racially abusing a Black music producer in Paris in a case that President Emmanuel Macron said “shames us”.

Video carried by the Loopsider website shows how music producer Michel Zecler was repeatedly beaten by officers for several minutes and subjected to racial abuse as he tried to enter his music studio last weekend.

Celebrities including football World Cup winners Kylian Mbappe and Antoine Griezmann condemned the beating, while French star singer Aya Nakamura said she wished the producer strength, adding “thank you to those who filmed”.

Macron on Friday called the incident an “unacceptable attack” and asked the French government to come up with proposals to “fight against discrimination”.

The president spoke of images “which shame us”, according to a statement released on social media.

A presidential official said earlier Friday that Macron was “very shocked” by the images which have sparked fresh accusations of systemic racism in the French police force.

‘Hit him so hard’

“They called me ‘dirty n****r’ several times to my face while they punched me,” Zecler told reporters outside police headquarters, where he lodged a formal complaint.

In one of the videos on Loopsider a neighbour who filmed the scene from above said a plain-clothes policeman punched a kneeling Zecler in the face “maybe seven times”.

The policeman “hit him so hard that his hand hurt”, the witness said.

The incident has raised questions about the future of Paris police chief Didier Lallement, already in the spotlight after the controversial forced removal of a migrant camp in Paris earlier in the week.

It also put the government on the back foot as it tries to push through new security legislation that would restrict the right of the media to publish the faces of police officers.

Interior Minister Gerald Darmanin, who is in charge of the police forces, told French television that the officers had tarnished the reputation of France’s security forces.

The officers, who had already been suspended from duty, were being held at the National Police Inspectorate General (IGPN), and prosecutors opened an investigation into violence by a person in authority and false testimony, the source said.

Zecler, 41, was initially himself detained for causing violence, but prosecutors threw out that probe and began investigating the officers instead.

“Nausea,” said the front-page headline in the left-wing Liberation daily over a close-up picture of Zecler’s swollen and bloodied face.

“The new video of a rare ferocity … adds to a problem fed over the last months by a succession of blunders and a tendency to revert to authoritarian tendencies,” it said.

The death in US police custody of George Floyd in May and the Black Lives Matter movement have reverberated in France where allegations of brutality against police officers are commonplace, particularly in poor and ethnically diverse urban areas.

“The French police has a structural problem with violence committed against visible minorities,” Fabien Jobard, a sociologist, told AFP.

“Unbearable video, unacceptable violence,” Mbappe wrote on Twitter next to a picture of the injured producer. “Say no to racism.”

The outcry comes after the lower house of parliament on Tuesday evening approved a security bill which would restrict the publication of photos or videos of police officers’ faces.

Media unions say it could give police a green light to prevent journalists – and social media users – from documenting abuses.

A protest against the draft law, which has yet to pass a Senate vote, has been called for Saturday in Paris

In the southern city of Toulouse, protesters took to the streets on Friday evening brandishing placards with slogans like “police everywhere, justice nowhere”.

In western Nantes, police said approximately 3,500 demonstrated, while organisers put the crowd at 6,000-7,000.

In a sign that the government could be preparing to backtrack, Prime Minister Jean Castex announced that he would appoint a commission to redraft Article 24 of the law that would restrict the publication of images of the police.