by The Lagos Today
in National, Headlines
4 min read
0
0 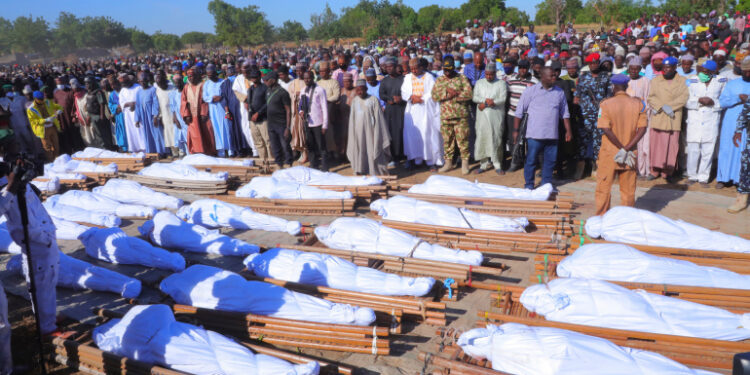 Farmers harvesting crops in Borno state attacked by armed men on motorcycles, in the ‘most violent direct’ assault against civilians this year, UN says.

A “gruesome” massacre against farmers in northeastern Nigeria killed at least 110 people, the United Nations has said, raising tolls initially indicating 43 and then at least 70 dead.

The killings took place in the early afternoon of Saturday in the village of Koshobe and other rural communities in the Jere local government area near Maiduguri, the capital of the conflict-hit Borno state.

“Armed men on motorcycles led a brutal attack on civilian men and women who were harvesting their fields,” Edward Kallon, the UN’s humanitarian coordinator in Nigeria, said in a statement on Sunday.

“At least 110 civilians were ruthlessly killed and many others were wounded in this attack,” he added, noting that several women are believed to have been kidnapped.

“The incident is the most violent direct attack against innocent civilians this year. I call for the perpetrators of this heinous and senseless act to be brought to justice,” Kallon said.

There has been no claim of responsibility for the attack, but the armed group Boko Haram and its splinter faction, the Islamic State in West Africa Province (ISWAP), have carried out a series of deadly assaults in the area in recent years.

Both groups are active in the region, where fighters have killed more than 30,000 people in the past decade during an armed campaign that has displaced some two million and has spread to neighbouring countries including Niger, Chad and Cameroon.

“I condemn the killing of our hard-working farmers by terrorists in Borno state. The entire country is hurt by these senseless killings,” the president said via his spokesman.

But security analyst Sulaiman Aledeh said many in the country are growing frustrated with the authorities’ inability to contain the conflict.

“If you’ve seen [what happened to] Niger, President Mahamadou Issoufou had to sack his security chiefs when 89 soldiers were killed. So Nigerians are asking why are you keeping these people,” he told Al Jazeera from Lagos.

“The problem here has to do with the government of the day seems to be rewarding loyalty over professionalism. They [Nigerians] think by now the government should’ve tried a few good other men to get them out of this mess.”

Earlier on Sunday, Borno Governor Babaganan Umara Zulum told journalists that at least 70 farmers were killed. He was speaking in Zabarmari village after attending the burial of 43 people whose bodies were recovered on Saturday.

Bulama Bukarti, an analyst at the Tony Blair Institute for Global Change, said the failure to control Boko Haram has devastated lives and the economy.

“The security forces are obviously losing this war,” he told Al Jazeera, describing 2019 as “the deadliest year” for Nigerian security forces since Boko Haram’s armed campaign started in 2009.

“About 800 security forces were killed, mostly in the first half of last year, and the Nigerian military responded by changing its strategy introducing what they called the ‘super camp strategy’ by which they withdrew soldiers from remote communities and rural areas and consolidated them in what they call ‘super camps’ in order to reduce military fatalities,” Bukarti said.

“The strategy succeeded in reducing military fatalities but the side-effect of that is that the Nigerian military has effectively surrendered control of rural Nigeria to Boko Haram fighters.

“You have Boko Haram ruling northeastern Nigeria and criminal gangs ruling the rural communities of northwestern Nigeria; this has a devastating effect on Nigeria’s economy and the future of the country entirely.”

Speaking to Al Jazeera from Maiduguri, Vincent Lelei, the UN’s deputy humanitarian coordinator for Nigeria, said people in the region “live in extreme fear” amid the prolonged crisis “which has led to so much suffering, so much displacement and destruction of livelihoods”.

“Borno state is a state with very good soil, there is a lot of water on the ground, and a lot of crops grow very quickly,” he said. “Given the opportunity, the livelihoods of the people could recover so quickly – but this insecurity, this problem of violence against unarmed civilians is reducing those opportunities.”