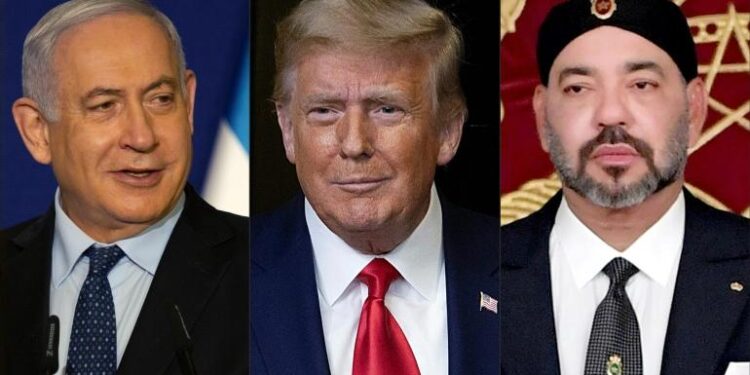 On Thursday, Morocco became the fourth Arab country since August to strike a deal aimed at normalising relations with Israel [Photos by various sources/AFP]

How the world reacted to announcement that Morocco will normalise relations with Israel in US-brokered deal.

On Thursday, Morocco became the fourth Arab country since August to strike a deal aimed at normalising relations with Israel. The others were the United Arab Emirates, Bahrain and Sudan.

As part of the agreement, US President Donald Trump agreed to recognise Morocco’s sovereignty over the Western Sahara, where there has been a decades-old territorial dispute with Morocco pitted against the Algeria-backed Polisario Front, a breakaway movement that seeks to establish an independent state in the territory.

Palestinians have been critical of the normalisation deals, saying Arab countries have set back the cause of peace by abandoning a long-standing demand that Israel gives up land for a Palestinian state before it can receive recognition.

“Any Arab retreat from the [2002] Arab Peace Initiative, which stipulates that normalisation comes only after Israel ends its occupation of Palestinian and Arab lands, is unacceptable and increases Israel’s belligerence and its denial of the Palestinian people’s rights,” al-Salhi said.

The Polisario, which is made up of the local Sahrawi people and fought a war for independence from 1975 to 1991, condemned “in the strongest terms” Trump’s attempt to give to Morocco “that which does not belong to him”.

“Trump’s decision does not change the legal nature of the Sahara issue because the international community does not recognise Morocco’s sovereignty over Western Sahara,” the statement read.

The Polisario, which seeks a referendum on self-determination, enjoys support from neighbouring Algeria, which has also welcomed thousands of Sahrawi refugees.

Morocco controls 80 percent of the disputed land, including phosphate deposits and the fishing waters.

Hossein Amir-Abdollahian, an adviser to Iran’s parliamentary speaker, said on Friday that Morocco’s normalisation of relations with Israel was a “betrayal” and a stab in the back of Palestine.

Previously, Iran also condemned Bahrain and the UAE in their decision to normalise relations with Israel, calling it a shameful move and holding their governments responsible for any insecurity caused by Israel in the Gulf region.

Egyptian President Abdel Fattah el-Sisi, whose country has been linked since 1979 by a peace treaty with Israel, welcomed the announcement.

El-Sisi hailed the deal as an “important step towards more stability and regional cooperation” in the Middle East.

“Regarding peace between Israelis and Palestinians, that remains an issue to be resolved. And the question of Western Sahara remains to be resolved. And in both cases, Spain’s position is very clear regarding that the United Nations resolutions need to be sought as a way to resolve those two questions,” he added.

Spain was the occupying power in Western Sahara until 1975 when the country relinquished administrative control to a joint administration by Morocco and Mauritania.

The country maintains close ties with the Sahrawi people and many activists have studied in Spain over the years.

Following the announcement, the UN said its position was “unchanged” on the disputed Western Sahara region.

UN Secretary-General Antonio Guterres believes “the solution to the question can still be found based on Security Council resolutions”, his spokesperson said.

The UN chief’s message to the two parties “is to avoid any action that could further aggravate a tense situation”, the spokesperson added.