William Barr: US attorney general to leave post by Christmas 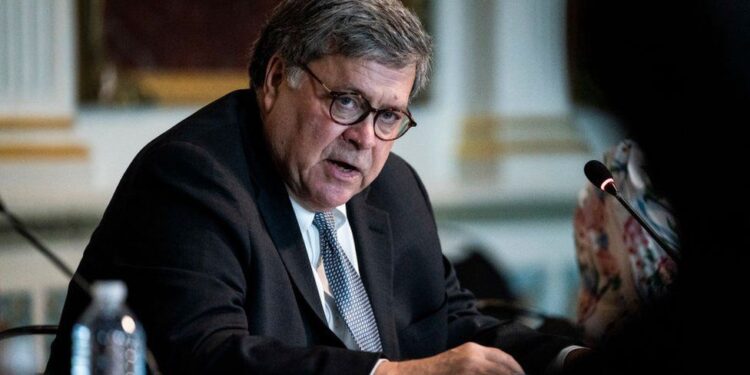 William Barr will step down on 23 December, President Trump said

US Attorney General William Barr, one of Donald Trump’s staunchest allies, is stepping down before Christmas, the president has announced.

Mr Barr’s term was due to end on 20 January, when Mr Trump leaves office.

Tensions between the two erupted after Mr Barr said there was no evidence of widespread fraud in November’s vote.

He was criticised by Mr Trump for not publicly disclosing that the justice department was investigating Joe Biden’s son during the campaign.

Mr Trump tweeted Mr Barr’s resignation letter saying: “Our relationship has been a very good one, he has done an outstanding job!”

Mr Barr’s letter to the president began by saying he “appreciated the opportunity to update” the president on the Department of Justice’s (DOJ) review of voter fraud allegations in the recent election and “how these allegations will continue to be pursued”.

He did not give more details about the review, and praised Mr Trump’s achievements in office before ending the letter by saying he will depart from his position on 23 December.

Why is Barr going now?

Rumours that Attorney General Barr was eying an early exit from the Trump administration turned out to be true. Although he received a traditional Trump send-off – his departure announced via Twitter – the president was cordial, thanking him and posting his effusive resignation letter.

If there were any discord over the attorney general’s recent handling of election investigations – his assertion that he had seen no evidence of widespread fraud – it did not spill into public view.

Mr Barr probably will best be remembered for his management of Robert Mueller’s Russia probe. He defused what could have been a political bomb for the president by giving an advanced summary of the independent counsel’s full report in a four-page memo that downplayed many of its more serious allegations.

Perhaps the president’s gratitude for that service outweighed any of their more recent disagreements and allowed them to part on amicable terms. Or perhaps in the waning days of the Trump presidency, there was no sense fighting on the way out the door.

With William Barr gone, however, there may be less institutional resistance if President Trump decides to bypass traditional Justice Department procedures and issue a spate of controversial pardons for his closest allies. By exiting now, Mr Barr is affording himself the ability to stay silent on such matters.

Mr Barr, 70, had previously served as attorney general under President George Bush in the early 1990s.

He came out of semi-retirement in 2019 to replace Jeff Sessions, who was forced out by President Trump over the justice department’s appointment of Special Counsel Robert Mueller to investigate alleged Russian meddling in the 2016 election.

Democratic critics of Mr Barr accused him of shielding his ex-boss from justice. Trump supporters recently turned on him due to his unwillingness to support Mr Trump’s election lawsuits.

His comments in early December that claims of voter fraud were unproven were a blow to Mr Trump, who has not accepted defeat.

Since 3 November’s election, Mr Trump has repeatedly made unsubstantiated claims of widespread voter fraud, and members of his legal defence team have spoken of an alleged international plot to hand President-elect Joe Biden the win.

Last week, Mr Trump attacked Mr Barr on Twitter, claiming that he did not publicly reveal that Mr Biden’s son Hunter was being investigated by the justice department. Hunter Biden has since confirmed that his tax affairs are being looked into.

Mr Trump claimed the decision not to reveal the investigation was a “big disadvantage” for the Republicans at the polls.

President Trump’s announcement of Mr Barr’s departure came at the same time the US electoral college affirmed Mr Biden’s presidential election victory, one of the final steps required for him to take office.