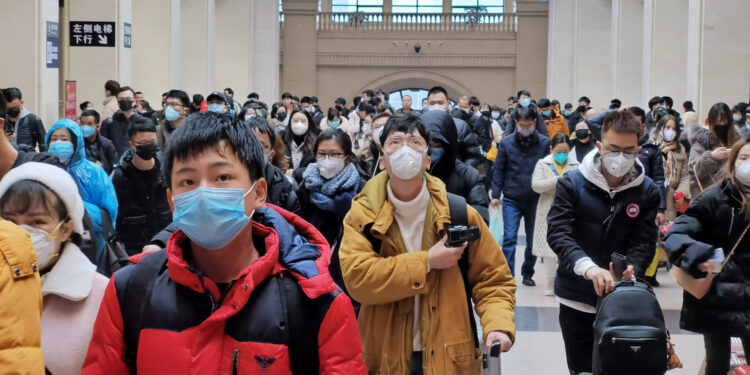 A team of 10 international scientists will travel to the Chinese city of Wuhan next month to investigate the origins of Covid-19, the World Health Organization (WHO) has said.

Beijing has been reluctant to agree to an independent inquiry and it has taken many months of negotiations for the WHO to be allowed access to the city.

The virus is thought to have come from a market in the city selling animals.

But the search for the source has led to tensions, notably with the US.

What is the aim of the investigation?

A biologist on the team travelling to Wuhan told the Associated Press news agency that the WHO was not seeking to apportion blame, but rather to prevent future outbreaks.

“It’s about trying to understand what happened and then see if, based on those data, we can try to reduce the risk in the future.”

Dr Leendertz said the aim was to find out when the virus began circulating and whether or not it originated in Wuhan.

The mission was expected to last four or five weeks, he added.

Where and when was the virus first detected?

In the early days of the virus, it was traced to a so-called “wet market” in Wuhan, Hubei province, and it was suggested that this was where it made the leap from animals to humans.

But experts now believe it may simply have been amplified there.

Research suggests that coronaviruses capable of infecting humans may have been circulating undetected in bats for decades.

Last December, a Chinese doctor at Wuhan Central Hospital – Li Wenliang – tried to warn fellow medics about a possible outbreak of a new disease, but was told by police to “stop making false comments” and was investigated for “spreading rumours”.

Dr Li died in February after contracting the virus while treating patients in the city.

In April, suspicions and allegations emerged that the virus might have leaked from a laboratory in Wuhan.

US State Department cables came to light suggesting that embassy officials were worried about biosecurity there.

The office of the US national intelligence director said at the time that while the virus was not man-made or genetically modified, officials were investigating whether the outbreak began through contact with animals or through a laboratory accident.

Recent reports in Chinese media have suggested that Covid-19 could have started outside China.

But analysts say the reports are without foundation, and the campaign reflects anxiety within the leadership in Beijing about damage to the country’s international reputation from the pandemic.

The question of an independent inquiry into the origins of the virus has become embroiled in international geopolitics and rows about the WHO.

The Trump administration has always taken a hard line, arguing that the WHO has been too soft on China and citing examples of officials praising the Chinese regime for its actions such as locking down Wuhan, mass testing and its publication of the genetic code of the virus.

However, lots of other countries also said there needed to be a proper inquiry – including Australia and the UK. The Associated Press revealed transcripts of video calls from WHO officials complaining back in January that they had not received the right data they needed from the Chinese authorities. A two-man WHO team that visited China this summer had difficulty negotiating access to Wuhan.

This trip, when it does happen, will probably concentrate on fundamental biological questions: did the virus originally come from bats? Was there an “intermediate host” linking bats to humans? And were Wuhan wet markets at the centre of the initial outbreak?

What has been the response to China’s reporting of the virus?

China’s tackling of the developing crisis was praised in January by the head of the WHO’s Health Emergencies Programme, Dr Mike Ryan, who said the “challenge is great but the response has been massive”.

Beijing had helped slow the spread of the virus, the WHO said, by quickly volunteering to share its knowledge of the virus’s genetic code.

However, the US – among a number of other countries – raised questions about whether China was fully transparent when the virus first emerged there.

In March, the head of the WHO in China, Dr Gauden Galea, told the BBC there were “shortcomings” in tackling the outbreak in the early days, but that experts would look at how issues could be avoided in the future.

Mr Trump later attacked the WHO itself for being too “China-centric” in praising Beijing, saying the organisation “really blew it” with its early guidance during the outbreak.

He announced that he was pulling the US out of the body and said funding would be redirected elsewhere.

However, US President-elect Joe Biden, who is due to be sworn in on 20 January, has since set up a foreign policy team tasked with keeping America in the WHO.