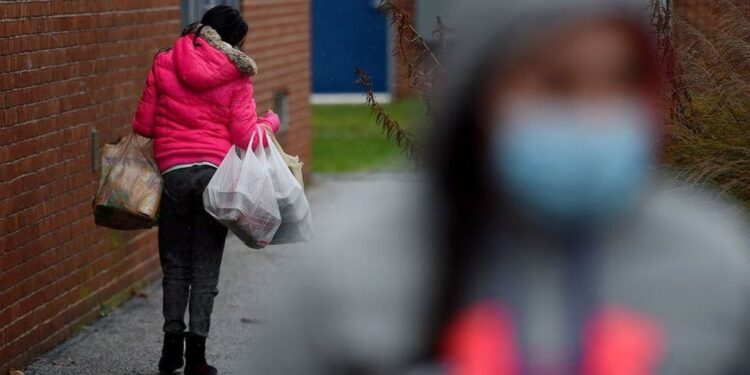 The US poverty rate has spiked is the last five months

After months of wrangling, US lawmakers have agreed to a roughly $900bn (£660bn) package of pandemic aid, including money for businesses and unemployment programmes.

The money is set to accompany a bigger, $1.4tn spending bill to fund government operations over the next nine months.

Many Covid-19 relief programmes were set to expire at the end of the month.

About 12 million Americans were at risk of losing access to unemployment benefits.

The House of Representatives and the Senate are expected to vote on the package on Monday. It will then need to be signed into law by President Donald Trump.

What do we know about the package?

The new package will include one-off $600 stimulus payments to most Americans, and will boost unemployment payments by $300 per week. It is also set to include more than $300bn in support for businesses, and money for vaccine distribution, schools and renters facing eviction.

The deal was announced on Sunday by Senate Majority Leader Mitch McConnell, a Republican. “We can finally report what our nation has needed to hear for a very long time: More help is on the way,” he said.

The package, he added, contained “targeted policies to help struggling Americans who have already waited too long”.

House Speaker Nancy Pelosi and Senate Minority Leader Chuck Schumer, both Democrats, said the package delivered “urgently needed funds to save the lives and livelihoods of the American people as the virus accelerates”.

The bill does not include substantial aid to local governments, which had been a top priority for many Democrats. Mr Schumer said the package did help local governments indirectly by providing money for schools, Covid-19 testing and other expenses.

He said the package would “establish a floor, not a ceiling, for coronavirus relief in 2021”, and that Democrats would push for more aid after President-elect Joe Biden took office on 20 January.

Congress was expected to pass the bill by Friday, but negotiations continued through the weekend.

The delays led to concerns over whether the government would shut down without a spending bill. Washington has been operating on temporary funding since October, the start of the federal government’s financial year.

What about previous aid?

In March the US approved more than $2.4tn in economic relief, including one-off $1,200 stimulus payments, funds for businesses and money to boost weekly unemployment payments by $600.

The package was credited with cushioning the economic hit of the pandemic, which cast more than 20 million Americans out of work this spring and drove the unemployment rate up to 14.7% in April.

The US has regained about half of the jobs lost, but economists and businesses have been pushing Congress to approve further economic relief, as programmes expired and money ran out, prompting recovery to slow.

A survey by the Chamber of Commerce released on Tuesday found three quarters of small businesses said they needed government help to survive.

In the last five months, the US poverty rate has spiked, reaching 11.7% last month – an increase of 2.4 percentage points since June, according to research from the University of Chicago and University of Notre Dame.

Many low-income Americans have seen their bank balances drop steadily in the months since April, when the first government stimulus cheques arrived. Without further assistance, lower-income families’ current account balances will drop faster than higher-income households, a report by the JPMorgan Chase Institute found.