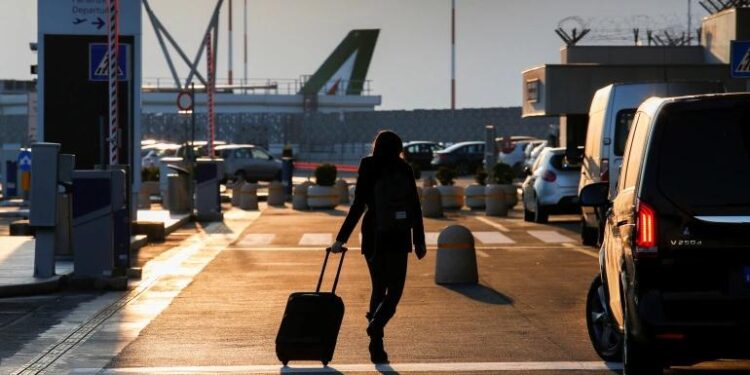 The new strain could be up to 70 percent more infectious, the United Kingdom has said, prompting its European neighbours and several other countries including Canada and Iran to close their doors to travellers from the country [Remo Casilli/Reuters]

Several countries ban flights and travellers from the UK after a new coronavirus strain was detected there.

Several countries have banned or will ban flights and travellers from the UK after the British government said on Sunday that the spread of a more-infectious new strain of the coronavirus was now “out of control”.

The UK government tightened its COVID-19 restrictions for London and nearby areas, disrupting Christmas holiday plans for millions.

Here are the countries that have announced travel bans so far:

Argentina has banned flights from the UK. It said the last flight from the UK would arrive in the country on Monday.

Belgium banned flights from the UK for at least 24 hours from midnight on Sunday.

Bulgaria said flights to and from the UK would be suspended from midnight Sunday until January 31.

Canada is banning all UK flights for 72 hours.

Chile announced that it would suspend flights from the UK effective Tuesday.

Colombia will suspend all flights to the UK.

Croatia said it would temporarily suspend passenger air traffic from the UK for 48 hours.

Denmark has suspended flights from the UK for 48 hours starting Monday at 09:00 GMT.

El Salvador‘s President Nayib Bukele said anyone who had been in Britain or South Africa in the past 30 days will not be allowed to enter the country.

Estonia, Latvia and Lithuania have halted flights from the UK.

Finland has barred flights from the UK for two weeks.

France has banned all travel from the UK for 48 hours, including journeys “related to goods transport by road, air, sea or rail”.

Germany halted all air links with the UK from midnight on Sunday, with the ban initially slated to last until December 31. Cargo flights will be exempt.

Hong Kong will ban flights from the UK over new coronavirus strain.

Italy has blocked flights from Great Britain and the “entry into Italy of people who have stayed there during the last 14 days”. The new strain has been found in one person in Italy who recently returned from the UK.

Iran has ordered flights from the UK suspended for two weeks.

Ireland has banned all flights arriving from the UK from midnight Sunday for at least 48 hours.

Israel said it was barring entry to foreign citizens travelling from the UK, Denmark and South Africa.

Kuwait has added the UK to a list of “high-risk” nations and banned flights.

Morocco banned all flights to the UK beginning on Sunday.

All passenger flights from the UK to the Netherlands have been banned until January 1, the Dutch government said. It later banned ferry passengers as well.

Poland will be suspending flights from the UK starting from midnight on Monday.

Romania has banned all flights to and from the UK for two weeks starting on Monday afternoon.

Turkey said flights from the UK, Denmark – where nine cases of the new strain have been detected – the Netherlands and South Africa will be suspended.