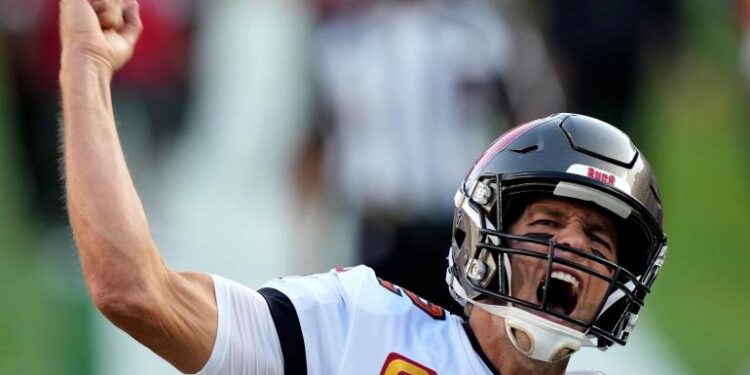 Brady, 43, threw for 201 yards while completing 21-of-29 passes with three touchdowns on Sunday to win his seventh Super Bowl title and fifth MVP award.

“They’re all special, it’s been an amazing year,” Brady said of his record number of championships. “Just really proud of all the guys, proud of all the coaches, the effort we put in tonight. If you want to get this far you’ve got to get the job done. We did it.”

The seven Super Bowl championships for Brady are two more than any player in NFL history and one more than any entire NFL franchise.

The Bucs’ victory already was starting to come to light in the first half. Brady threw his second touchdown pass to old friend Rob Gronkowski by the midway point of the second quarter for a 14-3 lead. He added another TD pass to Antonio Brown just before halftime.

The Buccaneers had not reached the playoffs since 2007 and had not won a postseason game since the 2002 title season.

Brady broke his own mark for oldest player to win a Super Bowl and joined Hall of Famer Peyton Manning as the only quarterback to win one with multiple franchises.

He knew what to do from there. His methodical and error-free second half mirrored his season-long performance for a franchise that got everything they could have ever hoped from the newcomer.

“He’s a winner, man,” Buccaneers head coach Bruce Arians said in a post-game interview. “That’s all you can say. He brought a winning mentality to a really talented football team that didn’t know how to win.”

‘Kept faith in us’

Some wondered if he could win it all again at age 43. The way Brady saw it, 20 years of experience over 301 regular-season games and 44 play off games offered him the knowledge to navigate the unknowns on the NFL’s biggest stage

Brady passed for just 61 yards after halftime, throwing just nine times, while completing five of those passes. He worked on the clock as much, if not more than, the Chiefs’ defence in the second half.

The Buccaneers ran the ball 19 times after halftime and the defence brought it home from there.

“He kept faith in us this whole season,” said Tampa Bay running back Leonard Fournette, who ran the ball 16 times for 89 yards and a touchdown. “He’s the GOAT [greatest of all time]. I will tell my kids I played with that man. He’s the greatest.”

Kansas City quarterback Patrick Mahomes promised to come back stronger after the Chiefs were manhandled by the Tampa Bay Buccaneers.

“Obviously I didn’t play the way I wanted to play,” Mahomes said. “What else can you say? All you can do is leave everything you have on the field. I feel like the guys did that… They beat us pretty good, the worst I’ve been beaten in a long time.

“Obviously it hurts right now. It hurts a lot. But we’re going to continue to get better.”

Stunningly, it was easier than any of Brady’s previous Super Bowl victories, which came by an average margin of five points. Mahomes lost by double digits for the first time in his four-year career.

The Buccaneers (15-5) took their second NFL title and first in 18 years as the first team to play the big game at home, capping an unusual and challenging season played through the novel coronavirus.

Mahomes and the Chiefs (16-3) failed to become the first repeat champions since Brady’s Patriots in 2003-04.

“I didn’t see it coming at all,” Chiefs coach Andy Reid said. “I thought we were going to come in and play these guys just like we’ve been playing teams, and it didn’t happen that way. I give them credit on that.”

The NFL completed its 269-game season on time without any cancellations, a remarkable accomplishment that required nearly one million COVID-19 tests for players and team personnel.

Because of the virus, only 25,000 mask-wearing fans attended, including 7,500 vaccinated healthcare workers given free tickets by the NFL. About 30,000 cardboard cutouts made the stadium look full.

The warmer climate in Florida suited Brady perfectly. He passed NBA great Michael Jordan in championships and it does not seem he is ready to slow down. He already said he might play past age 45.

“I’m coming back,” Brady said with a smile.