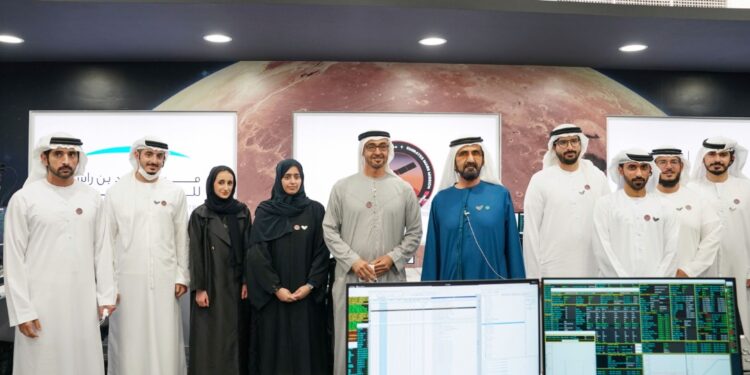 The Emirates Mars mission, named the Hope Probe successfully arrives at Mars after a complex manoeuvre. The UAE makes history as the first Arab nation, and fifth in the world, to reach Mars.

Ground control station in Al Khawaneej received the first signal from the probe at 8:08 pm. First picture of Mars to be sent by Hope Probe within a week.

The Probe’s scientific mission commences in April and will continue until April 2023, with a possibility to extend for two additional years

UAE President His Highness Sheikh Khalifa bin Zayed Al Nahyan congratulated UAE citizens and residents and people of the wider region for the successful arrival of the UAE’s Hope Probe’s at Mars in the first-ever Arab interplanetary mission that marks the Arab world’s entry into the global space exploration race.

The UAE made history on Tuesday evening, 9 February as the first Arab nation, and the fifth in the world, to reach Mars after the Hope Probe successfully entered the Red Planet’s orbit at 7:42 pm.

The probe overcame the most critical part of its mission, the Mars Orbital Insertion (MOI) that involved reversing and firing its six Delta-V thrusters to rapidly reduce its speed from 121,000 km/h to 18,000 km/h. During the 27-minute critical phase, the contact with the probe was kept to a minimum.

Hailing the historic breakthrough, HH Sheikh Khalifa bin Zayed Al Nahyan said, “This historic achievement would not have been possible without the persistence and determination to implement the idea that emerged at the end of 2013 from His Highness Sheikh Mohammed bin Rashid Al Maktoum, Vice President and Prime Minister of UAE and Ruler of Dubai, who followed it up closely until its success.”

He also praised the efforts of His Highness Sheikh Mohamed bin Zayed Al Nahyan, Crown Prince of Abu Dhabi and Deputy Supreme Commander of the UAE Armed Forces, in extending all the support needed to make the dream come true. “Thanks to both leaders and the team of scientists and engineers behind the project for proving to the world that the UAE is capable of achieving the impossible.”

HH Sheikh Khalifa bin Zayed hailed the space project, which was the outcome of solid institutional collaboration and a bold vision that aimed to serve mankind and the international scientific community.

The Hope Probe is the first of three exploration missions to arrive at the Red Planet in February. China and the US are leading ambitious projects to Mars, scheduled to arrive on 10 February and Feb. 18 respectively. The Hope Probe’s arrival at Mars, after travelling 493 million kilometres in a seven-month journey in space, marks the UAE’s 50th-anniversary celebrations.

Now that it has entered the Martian orbit, the Probe will transition to the science phase– transmitting its first image of Mars back to Earth within just one week.

The Rulers of Dubai and Abu Dhabi celebrated the project as a great success for the UAE, the wider Arab region and the global scientific community following six years of technical and logistical efforts to complete the project. They hailed the team of engineers and scientists behind the project who made it a reality after relentless efforts. His Highness Sheikh Mohammed bin Rashid Al Maktoum, Vice President and Prime Minister of the UAE and Ruler of Dubai; and His Highness Sheikh Mohamed bin Zayed Al Nahyan, Crown Prince of Abu Dhabi and Deputy Supreme Commander of the UAE Armed Forces witnessed the historic moment at the Ground Control Station at the Mohammed Bin Rashid Space Centre in Al Khawaneej in the presence of His Highness Sheikh Hamdan bin Mohammed bin Rashid Al Maktoum, Crown Prince of Dubai, Chairman of The Executive Council of Dubai and Chairman of the Mohammed Bin Rashid Space Centre; His Highness Lieutenant General Sheikh Saif bin Zayed Al Nahyan, Deputy Prime Minister and Minister of Interior; and His Highness Sheikh Mansour bin Zayed Al Nahyan, Deputy Prime Minister and Minister of Presidential Affairs.

Hailing the success of the mission, His Highness Sheikh Mohammed bin Rashid Al Maktoum, Vice President and Prime Minister of the UAE and Ruler of Dubai, said: “The Hope Probe’s historic arrival at Mars is the greatest celebration of the 50th anniversary of our country. It sets the tone for the beginning of the next 50-year phase with boundless ambitions and dreams.” He added, “Our next accomplishments will be even bigger and greater.”

He added, “We dedicate our Mars achievement to the people of the UAE and the rest of the Arab world. Our success proves that Arabs are capable of reviving the region’s legacy and status in the scientific sphere.”

“We mark our country’s 50th anniversary with our Mars stop and invite Arab youth to join the UAE’s science movement that has marched at high speed.”

His Highness Sheikh Mohamed bin Zayed Al Nahyan, Crown Prince of Abu Dhabi and Deputy Supreme Commander of the UAE Armed Forces, said: “the Hope Probe’s successful arrival at Mars is an Arab and Islamic achievement that was made possible by the relentless efforts of our youth. The mission marks our entry into the global race to space.” He added that “The Probe’s arrival at the Red Planet celebrates our journey of 50 years and is an achievement that reflects the UAE’s rising profile and its remarkable success story.”

He noted that the “Emirates Mars Mission paves the way for the next 50 years of sustainable scientific development in the UAE.”

“Our human capital is the true wealth of our nation. Investing in our people forms the main pillar of all our development strategies and policies.”

Sheikh Mohamed bin Zayed stressed that “Emirati youth will be the ones leading our development for the next 50 years with their acquired knowledge and skills. The Emirates Mars Mission contributed to building high levels of national capabilities and equipped Emiratis to accomplishments in the space sector.”

His Highness Sheikh Hamdan bin Mohammed bin Rashid Al Maktoum, Crown Prince of Dubai, Chairman of the Executive Council and Chairman of the Mohammed Bin Rashid Space Centre said: “The Hope Probe’s historic space journey to Mars is a significant Arab and Emirati achievement.” He noted that “the Emirates Mars Mission drafts a new chapter in the UAE’s record of achievements in the space science sector and supports the efforts of our country to build a sustainable knowledge-based economy driven by advanced technologies.”

He concluded, “The UAE’s 50th-anniversary celebrations have become associated with the Hope Probe’s arrival at Mars, which places a big responsibility on the next generation to make greater achievements in the next 50 years.” 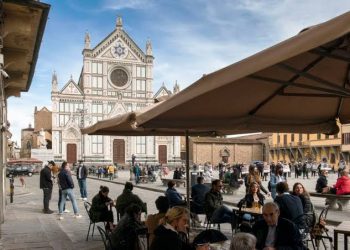 Good news for Americans! The European Union's governing body has recommended that the bloc lift restrictions on non-essential travel from 14... 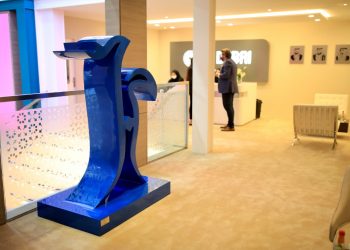