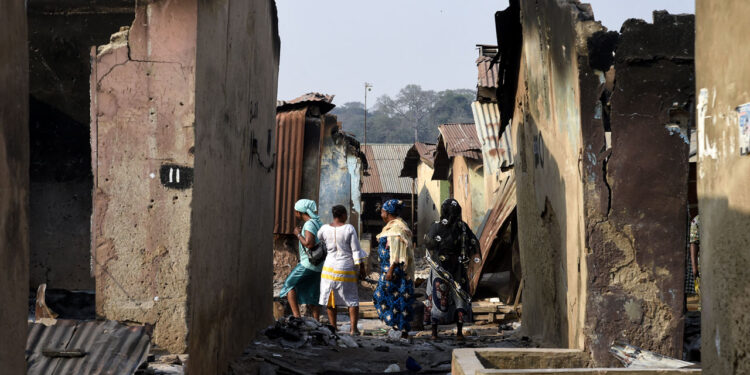 Normalcy has returned to the Shasha community in Ibadan, Oyo State, after the ethnic-related violence that broke out at a popular foodstuff market last week.

Though the market is still under lock and key as directed by the state government, residents were seen on Wednesday moving around freely.

The easing of tension came as the Oyo State House of Assembly, on Tuesday, urged the state government to consider the possibility of relocating the market to bigger site; and governors of Kano, Kebbi, Zamfara and Niger, who visited him, promised to contribute to the rebuilding of the market.

Following the shutdown of the market and fear of reprisal, some residents relocated to Iroko, another community in Akinyele Local Council Area of Oyo State, vowing never to return to Shasha.

A visit to Iroko, an agrarian community on old Oyo Road, about 25 minutes drive to Ibadan saw many trailers loaded with foodstuff offloading goods in the community and erecting new stalls.

Muhammed Sani, who spoke on behalf of the traders, said they would not return to Shasha because of tension and fragile peace in the community.

They also cited leadership tussle between the Seriki of Shasha, Alhaji Haruna Maiyasin, and Baale of Shasha, Chief Amusa Ajani, as another time bomb waiting to explode.

Another trader, Salihu Kankia, alleged that some persons from Niger Republic and Togo were behind the mayhem and urged the government to identify foreign nationals in the market.

The state lawmakers made the call for relocation of the market while deliberating on the clash. They stressed the need for the state government to find solution to recurring clashes at the market.

Olatunde Kehinde representing Akinyele State Constituency 2, who brought the matter before the House, recalled with bitterness how lives were lost and properties destroyed during the clash, and said it was disappointing that security operatives were slow in responding to the crisis.

The lawmakers in their resolutions noted that the location of the market could no longer accommodate the number of traders and their volume of goods, hence the need for government to move the market to a new area.

They also urged the state government to set up a panel of enquiry to ascertain the cause(s) of the clash with a view to prosecuting those responsible for the mayhem.

The House further called for a security summit in all constituencies across the state to enable stakeholders address the situation and suggest ways of averting future security crises.

The Speaker Oyo, State House of Assembly, Hon Adebo Ogundoyin, said it was unfortunate the crisis was not well managed by the Hausa and Yoruba indigenes at the market.

NGF made its pledge to rebuild the market, when a delegation of the forum, led by the Governor of Kebbi State, Senator Abubakar Atiku Bagudu, visited Ibadan in response to the crisis.

Bagudu, who was joined by his counterparts from Zamfara, Kano, and Niger states, commended the Oyo State Governor, ’Seyi Makinde, for his effort at restoring peace and normalcy to the community.

Bagudu said: “We, the Nigeria Governors’ Forum, are going to support this effort. As a matter of fact, we have given a token to those who are already displaced, and we will meet at a wider table tomorrow and can assure that more support will be mobilised.”

Kebbi governor added the Forum would assist the state government in rebuilding the market and providing palliative for the victims, saying: “We were well received by our host, Governor Makinde, who briefed us about what happened. And, today, he has taken us to Shasha market. On our way, we had a stopover at Bodija market and we are pleased that we saw Nigerians of different tribes at the market conducting activities, which is evidence of return of normalcy.

“In fact, we saw some onion sellers from different states, including Kebbi, Zamfara, and Sokoto and other states.”

Governor Makinde, who led the governors to Shasha, said his government would continue to look for avenues to ensure peaceful co-existence.

Makinde also commended the NGF for identifying with the state in its efforts to unite all sides.

He declared that the unity of Nigeria and the need to restore peace were weightier than political divides, adding that his administration was ready to ensure peaceful co-existence among residents of Shasha community.