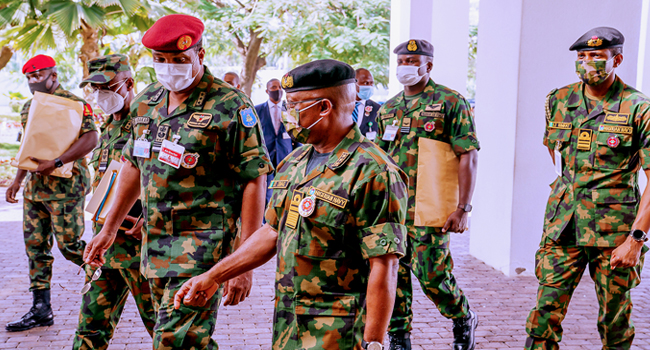 The Senate Committee on Foreign Affairs has started screening the immediate erstwhile service chiefs as ambassadors.

The nominees are being screened for the position of non-career ambassadors.

The screening exercise commenced a few minutes past noon and is underway.

The chairman of the panel, Muhammed Bulkachuwa, is presiding over the screening.

The screening comes barely two weeks after they were nominated by President Muhammadu Buhari.

The president’s media aide, Femi Adeina, had, on February 4, announced that the president had forwarded the ex-service chiefs’ names to the Senate for confirmation as non-career ambassadors. This was barely a week after they resigned from service and their replacements announced.

Their appointment has been trailed by condemnation, with many Nigerians saying that the president’s decision was aimed at shielding the former military officials from possible prosecution, especially by the International Court of Justice (ICJ).

Many allegations have been levelled before the military chiefs including the 2015 massacre of more than 350 members of the Islamic Movement in Nigeria (IMN), violent attacks on members of the outlawed Indigenous People of Biafra (IPOB), last October’s shooting and of innocent Nigerians who took part in the #EndSARS protest at the Lekki Toll Gate in Lagos, the extrajudicial killings in Oyigbo, an Igbo settlement in Rivers State, among others.