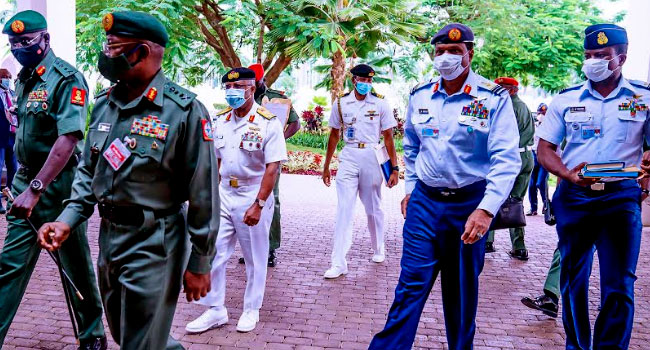 Nigeria’s Senate has confirmed the immediate past service chiefs as non-career ambassadors, dismissing all pending petitions against them.

The confirmation was sequel to the adoption of the report of the committee which was presented by the chairman, Muhammed Bulkachuwa.

In his presentation, Bulkachuwa said the nominees were asked questions regarding their previous services and their recent nomination.

The nomination, he said, is in line with Section 171(40) of the 1999 Constitution of the Federal Republic of Nigeria.

“The police report received showed that the nominees have been cleared by the DSS. They presented their slip from the Code of Conduct Bureau and possess the requisite skills for the position.

“Their experience as service chiefs makes them eminently capable for the position and they were knowledgeable and articulate in their response to questions posed by members of the panel,” he continued.

Bulkachuwa said the committee was satisfied with their performance and their knowledge of international diplomacy. He, thereafter, asked the Senate to confirm the nominees.

However, the Senate Minority Leader, Enyinnaya Abaribe (PDP, Abia), questioned why the petitions were dismissed.

He said the Senate on three occasions, took resolutions that the nominees be removed as service chiefs and for them to be brought back to be confirmed for another position demands explanation.

In his reaction, the Senate President, Ahmad Lawan, said having looked through the said resolutions, “understanding is that they have not been appointed to serve as service chiefs – which is a plus for the Senate.”

“If they are nominated for a different position, our resolution will not apply. What we have to do is to advise the executive to use the past experience of the ex-service chiefs in their new positions.

“The nomination cannot be nullified because we said they should be changed,” he said.

Abaribe was ruled out of order by Mr. Lawan when he attempted to make further comments.

The Senate, thereafter, resolved into the committee of the whole to confirm the nominees despite echoes of “nays” from many senators.

The confirmation comes amidst criticism of their nomination by many Nigerians. This was shortly after presidential media aide, Femi Adesina, announced on February 4 that the president had forwarded the ex-service chiefs’ names to the Senate for confirmation as non-career ambassadors.

The appointment came a week after they resigned from service and their replacements announced.

There were many allegations levelled before the ex-military chiefs ranging from the 2015 massacre of more than 340 members of the Islamic Movement in Nigeria (IMN), violent attacks on members of the outlawed Indigenous People of Biafra (IPOB), last October’s shooting of innocent Nigerians who took part in the #EndSARS protest at the Lekki Toll Gate in Lagos, the extrajudicial killings in Oyigbo, an Igbo settlement in Rivers State, among others.

Experts, both foreign and local, have called on the national assembly and even countries where they will be posted to reject them as ambassadors.

During his screening, Buratai said the Nigerian military cannot solve the Boko Haram insurgency because they did not start it in the first place.

He said this at the screening exercise where the former service chiefs were grilled one after the other by members of the panel.

They were asked questions ranging from their successes in their previous jobs to their plans if confirmed for the new appointment.