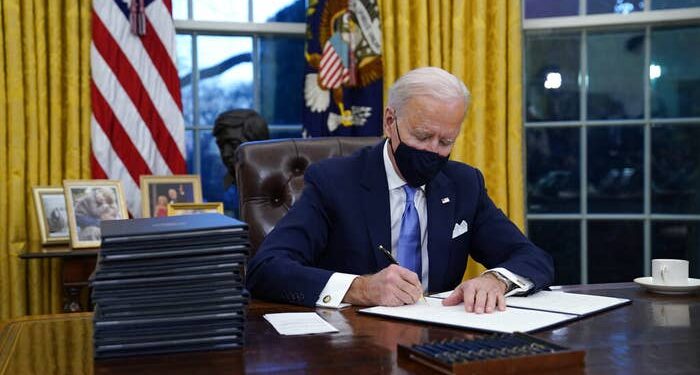 Biden rescinded Trump’s proclamation limiting the number of new work visas for temporary foreign workers in the US amid the coronavirus pandemic.

According to a report from Reuters, the order by President Biden was provided by a communication from the White House on Wednesday, February 25, 2021.

Former President Donald Trump had in June 2020, signed the proclamation that suspended certain categories of non-immigrant work visas as part of the effort to revive the US economy and the need to protect US workers amid high unemployment due to the coronavirus pandemic.

However, President Biden rejected that reasoning in a proclamation while rescinding the visa ban and said it had prevented families from reuniting in the United States and harmed US businesses.

He pointed out that the suspension of entry imposed in Proclamation 10014, does not advance the interest of the United States.

The newly sworn US President had pledged to reverse many of Trump’s hardline immigration policies with immigrant advocates recently asking him to lift the visa ban, which was set to expire on March 31.

The suspension order by former President Donald Trump for a certain category of non-immigrant work visas includes H-1B visas for work in high-tech industries and a range of others for low-skill workers, interns, teachers, and company transfers.

In October, a federal judge in California blocked Trump’s ban on those foreign guest workers as it affected hundreds of thousands of US businesses that fought the policy in court.