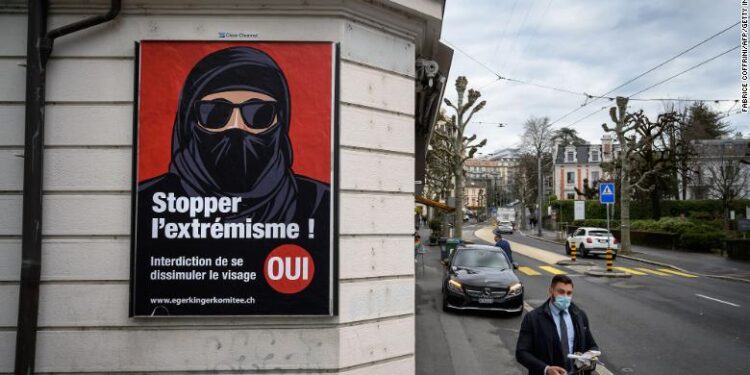 A man wearing a face mask walks on February 4, 2021 in Lausanne past an electoral poster in favor of a "burqa ban" initiative reading in French: "Stop extremism!" ahead of a nationwide vote by Swiss citizen on whether they want to ban face coverings in public spaces or not. - The vote will take place on on March 7, 2021, as part of the country's famous direct democratic system. A clear majority of Swiss voters favour introducing a nationwide prohibition against wearing face-covering garments in public spaces, known as a "burqa ban", a poll showed last month. (Photo by Fabrice COFFRINI / AFP) (Photo by FABRICE COFFRINI/AFP via Getty Images)

Swiss voters have approved a ban on full facial coverings including niqab and burqa in nearly all public places in a closely contested referendum on Sunday.

The result means facial covering will be banned in all publicly accessible places, including on the streets, in public offices, on public transport, in restaurants, shops and in the countryside.

The controversial proposal gained support of 51.21% of voters and the majority of the country’s 26 cantons, according to official provisional results published by the federal government.

The only exceptions include places of worship and other sacred sites.

Face coverings will also be allowed if worn for health and safety reasons, because of the weather and in situations where it is considered a “local custom” to do so, such as at carnivals, according to the text of the proposal published by the Swiss federal government.

There will be no additional exceptions, for example for tourists, the government document said.

The proposal, put forward by several groups including the right wing Swiss People’s Party, does not mention Islam specifically, but has been widely referred to as the “burqa ban” in Swiss media.

It has been criticized by a number of Swiss religious organizations and human rights and civic groups, as well as the federal government.

The Swiss Council of Religions, which represents all major religious communities in Switzerland, condemned the proposal earlier this year, stressing that the human right to religious freedom also protects religious practices such as dress codes. 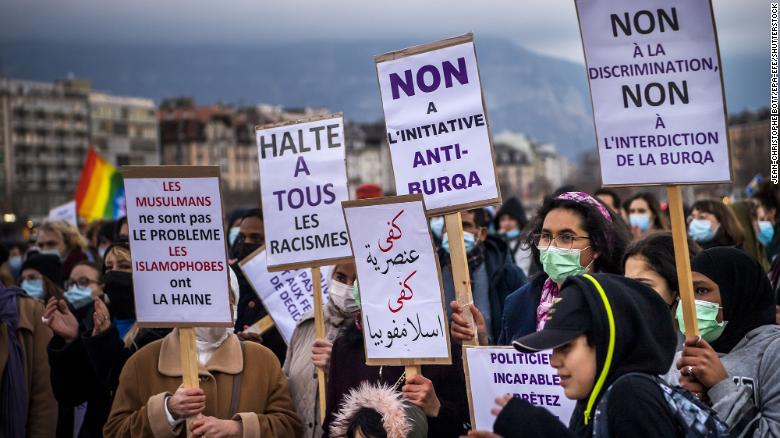 Activists demonstrate against the “anti-burqa” initiative in Geneva on March 5, 2021.

The Swiss Federal Council, which serves as the country’s federal government, and the Swiss Parliament also rejected the initiative as going too far and advised people to vote against it, according to the government documents.

The two bodies have tabled a counter-proposal to the ban, which would require people to remove any face covering and show their faces to the police or other officials if necessary for identification purposes.

Those opposing the ban have also pointed out it appears to be mostly pointless. According to a new book by Andreas Tunger-Zanetti, a researcher at the University of Lucerne who has been studying Islam in Switzerland since 2007, virtually nobody wears a burqa in Switzerland and the number of people wearing a niqab is limited to three dozen at the most.

The referendum on Sunday was the culmination of several years of debates over the issue and comes 12 years after another referendum outlawed the construction of minarets in the country.

Two Swiss cantons — St Gallen and Ticino — have already introduced a ban on full facial coverings in the past, according to the Federal Government’s website.

In several other cantons full facial covering is currently only banned at protests.

The result of the vote has been criticized as “anti-Muslim” by Amnesty International. “Swiss voters have once again approved an initiative that discriminates against one religious community in particular, needlessly fueling division and fear,” the group said in a statement on Sunday.

Bans, partials bans and local bans of face coverings are already in place in several European countries, including France, Germany, Belgium, the Netherlands and Denmark.

France was the first to ban burqas and niqabs in public spaces in 2011.

The European Court of Human Rights upheld the ban in 2014. In 2018, the United Nations Human Rights Committee said the ban violates the human rights of Muslim women and risks “confining them to their homes.”

Meghan and Harry interview: I didn't want to be alive anymore, duchess says