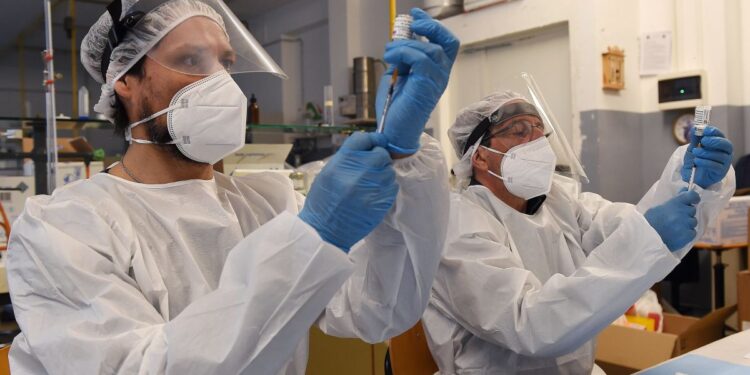 Spain, Germany, France and Italy have become the latest European countries to temporarily halt the rollout of the Oxford-AstraZeneca Covid-19 vaccine over a small number of blood clot concerns, going against the advice of international medical agencies as a third wave of infections looms over the continent.

It’s a “temporary and precautionary” suspension, she said, “until the risks can be evaluated by the European Medicines Agency.”

After initially standing by the safety of the vaccine, German health minister Jens Spahn said Monday that the country would pause inoculations as a precaution, following reports of a handful of cases of blood clots in people vaccinated with the AstraZeneca shot in Denmark and Norway.

France and Italy also halted their rollouts of the vaccine Monday, pending review by the EU’s medicines regulator, the European Medicines Agency (EMA), although the body later reiterated its advice that countries stick to the rollout.

“We have decided to suspend the use of AstraZeneca as a precautionary measure and are hoping to resume it quickly if the EMA’s advice allows it,” French President Emmanuel Macron said at Monday news conference.

The suspensions came hours after prosecutors in northern Italy ordered a batch of the vaccine to be seized, citing a man who fell ill and died after taking a shot. Italy’s medicines agency also suspended the use of the AstraZeneca vaccine “as a precaution and temporarily,” prior to the EMA meeting, the Italian medicines agency AIFA announced Monday.

Much of Europe has now halted the shot for the time being, following the fatality of one woman in Denmark that has yet to be linked to a vaccine. Another death was also reported in Norway on Monday, along with a handful of non-fatal cases in both countries.

The suspensions go against the advice of the World Health Organization, the EMA and the pharmaceutical giant itself, all of whom have said there is no evidence of a link with clotting and that rollouts should continue while the reports are investigated.

“As of today, there is no evidence that the incidents are caused by the vaccine and it is important that vaccination campaigns continue so that we can save lives and stem severe disease from the virus,” the WHO said in a statement to CNN. The organization added it was assessing the latest reports, but said any change in its recommendations would be “unlikely.”

The EMA also reiterated that countries should continue their rollouts, adding that it would meet on Thursday to discuss the concerns but that the benefit of vaccinations outweigh any potential risks.

“While its investigation is ongoing, EMA currently remains of the view that the benefits of the AstraZeneca vaccine in preventing COVID-19, with its associated risk of hospitalisation and death, outweigh the risks of side effects,” the agency said.

More than 11 million AstraZeneca jabs have been delivered in the UK, which is now one of few major European countries still backing the vaccine. Spahn said he spoke with his counterpart in the UK before halting Germany’s rollout.

AstraZeneca doubled down on the safety of its shots Sunday, saying that a careful review of the 17 million people inoculated with it in the EU and Britain found again that there was “no evidence” of a link with clots.

It found that of those millions of people, there have been 15 events of deep vein thrombosis (DVT) and 22 events of pulmonary embolism reported after vaccination; lower than the number that would be expected to occur naturally within that population size.

Nonetheless, the death of one woman in Denmark prompted a number of countries to pause their rollouts until reviews have been conducted. The Danish Medicines Agency said on Monday the woman in question had an “unusual” combination of symptoms before she died.

In the Netherlands, a lab that monitors the use of pharmaceuticals said it has received reports of 10 instances of blood clots in people who received the AstraZeneca Covid-19 vaccine, but none had the low blood platelet condition reportedly observed in Norway and Denmark.

Over the weekend Ireland and the Netherlands joined the pack of countries pausing their use of the AstraZeneca vaccine. The chairwoman of Ireland’s vaccination advisory committee said it took the step to “maintain confidence” in the country’s inoculation program. The Dutch government said its move was “precautionary” and would last for two weeks; this came just days after health minister Hugo de Jonge said there was “no cause for concern” over the shot.

The UK has by far led the way in administering the AstraZeneca vaccine, with more than 11 million people receiving a dose, and it too has stood by the shot. Real-world data from the country has also shown it is having a significant impact in reducing Covid-19 hospitalizations.

A single dose of the vaccine reduces the risk of hospitalization from Covid-19 by more than 80% in people aged over 80, data from Public Health England showed earlier this month. The vaccine is given in two doses, though countries differ in how far apart they are spreading those shots.

Wave of infections in Europe

The episodes marked the latest example of the AstraZeneca vaccine dividing Europe. In the space of a few weeks, several EU countries have angrily rebuked the firm for failing to provide its full amount of promised doses; cast then walked back doubts about its efficacy in older people; blocked shipments of the vaccine from leaving the continent; and now halted their rollouts over blood clot concerns.

The continent’s newest concerns over the vaccine come at a difficult moment, with a third wave of infections threatening to grip Europe one year after the pandemic began.

Italians are back under lockdown restrictions and millions have had their Easter plans canceled again, in scenes eerily similar to last March when Italy became the first European country to restrict people’s movement as the coronavirus ran rampant.

Citizens were banned from traveling between regions from Monday and were told the entire nation would be considered a “red zone” over the Easter weekend.

Italy’s new Prime Minister Mario Draghi had said the rules were necessary because “we are unfortunately facing a new wave of infections,” a somber reality after 12 months of pandemic misery.

The restrictions mean that once again, many Italians can’t celebrate Easter with their families. “I am aware that today’s measures will have consequences on children’s education, on the economy and also on the psychological state of us all,” Draghi admitted last Friday, when the measures were passed by his cabinet.

But the picture is similarly bleak across Europe, where several countries are scrambling to respond to an uptick in infections.

On Monday, Germany registered another increase in cases. In France, hospitalizations are again on the rise — and the situation became so stark in Paris over the weekend that leaders started evacuating around 100 Covid-19 patients from the region, citing increased pressure on hospitals.

The patients will be moved to “other regions where the situation in ICUs is less tense,” French government spokesperson Gabriel Attal said on Sunday. Parisian hospitals were already canceling many surgeries to tackle the outbreak, with health minister Olivier Véran saying a coronavirus patient was being admitted to their intensive care units every 12 minutes.

The main cause of the wave of infections across the continent appears to be the more contagious coronavirus variant first identified in the UK; in France, the strand is now accounting for 66% of cases, according to the latest official data.

That variant caused havoc in Britain over Christmas and early in the new year, quickly adding to the UK’s death toll, the highest in Europe at over 125,000 fatalities.

A stringent lockdown and a rapid vaccination drive has since combined to bring UK cases down dramatically and ease the pressure on hospitals.