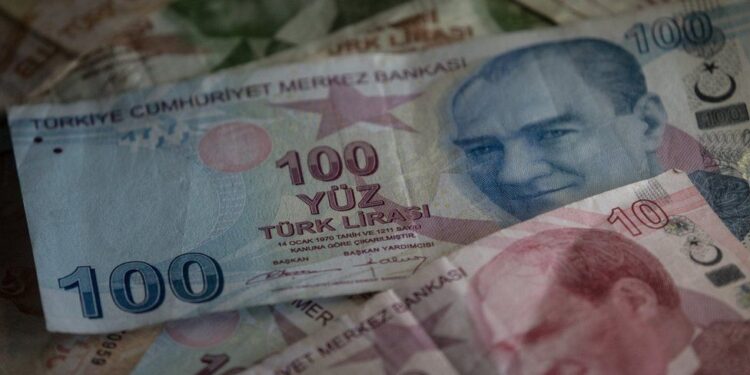 Turkey’s currency has tumbled as much as 14% after President Recep Tayyip Erdogan sacked the country’s central bank governor over the weekend.

Naci Agbal had been credited as a key force in pulling the lira back from historic lows.

Mr Erdogan replaced him in a surprise move on Saturday, the third central bank governor exit in under two years.

Mr Agbal, appointed in November, had been raising interest rates to fight an inflation rate running above 15%.

The removal has shocked both local and foreign investors who had praised Turkey’s central bank’s recent monetary policy. The fallout from the sacking hit shares on the Istanbul stock exchange, and raised concerns about the impact Turkey’s borrowing costs.

After dropping sharply, the lira then recovered some ground to stand about 8% lower against the US dollar. Trading on the exchange was suspended for a period after a sharp fall in share prices triggered automatic circuit breakers.

“The authorities will be left with two choices, either it pledges to use interest rates to stabilise markets, or it imposes capital controls,” said Per Hammarlund, senior strategist at SEB Research.

“Given the increasingly authoritarian approach that President Erdogan has taken, capital controls are looking likethe most likely choice.”

The lira was at one point the best performing emerging-market currency of 2021, having recovered almost a fifth from a low against the US dollar.

Investors have been calling for tighter monetary policy in Turkey to tame its high inflation rate, as prices rise rapidly in the country.

There are now concerns that Mr Erdogan’s decision to install Sahap Kavcioglu in the role could erode the gains made during Mr Agbal’s short tenure.

Mr Kavcioglu is a little-known professor of banking and a former lawmaker from the ruling Justice and Development party. He shares Mr Erdogan’s unorthodox view that high interest rates can fuel inflation.

Turkey’s interest rate stands at 19% which has attracted foreign investors to park their cash in the currency.

In a statement on Sunday, the central bank said it “will continue to use the monetary policy tools effectively in line with its main objective of achieving a permanent fall in inflation”.

Jeffrey Halley, a senior market analyst at currency exchange firm OANDA argues that President Erdogan has his own brand of economics – Erdonomics.

“The base premise of Erdonomics is that higher interest rates cause higher inflation, a theory that flies in the face of conventional economic theory everywhere,” Mr Halley told the BBC.

Higher interest rates lead to higher costs of borrowing which deters consumers from over-spending, while encouraging people to save. However, the downside is often slower economic growth.

“Mr Agbal was widely respected for his attempts to stabilise inflation.”

Lagos Free Zone To Get Extra $5bn Investment Before 2025