Dislodging the huge ship blocking the Suez Canal could take ‘days to weeks,’ as the traffic jam builds 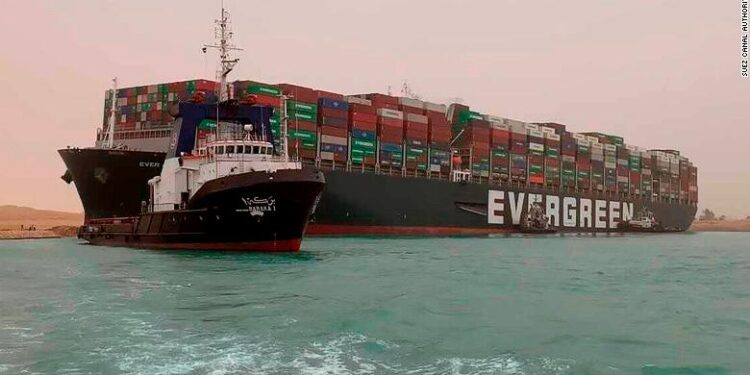 In this photo released by the Suez Canal Authority, a boat navigates in front of a massive cargo ship, named the Ever Green, rear, sits grounded Wednesday, March 24, 2021, after it turned sideways in Egypt???s Suez Canal, blocking traffic in a crucial East-West waterway for global shipping. An Egyptian official warned Wednesday it could take at least two days to clear the ship. (Suez Canal Authority via AP)

Shipping experts believe it could take days or even weeks to free the 224,000-ton vessel that is wedged across the Suez Canal, blocking one of the world’s busiest waterways since Tuesday.

The Ever Given, a container ship almost as long as the Empire State Building is tall, ran aground on March 23 after being caught in 40-knot winds and a sandstorm that caused low visibility and poor navigation, the Suez Canal Authority (SCA) said in a statement.Authorities attempted to re-float the vessel Thursday morning but were not successful.

Late on Thursday evening, dredgers shifted their focus to removing sand and mud from around the port side of the bow of the large container ship, according to Bernhard Schulte Shipmanagement (BSM) the vessel’s technical manager.”

In addition to the dredgers already on site a specialized suction dredger is now with the vessel and will shortly begin work. This dredger can shift 2,000 cubic meters of material every hour,” a statement from BSM said.

All 25 crewmembers onboard the ship are Indian nationals and remain on the vessel, BSM also said. 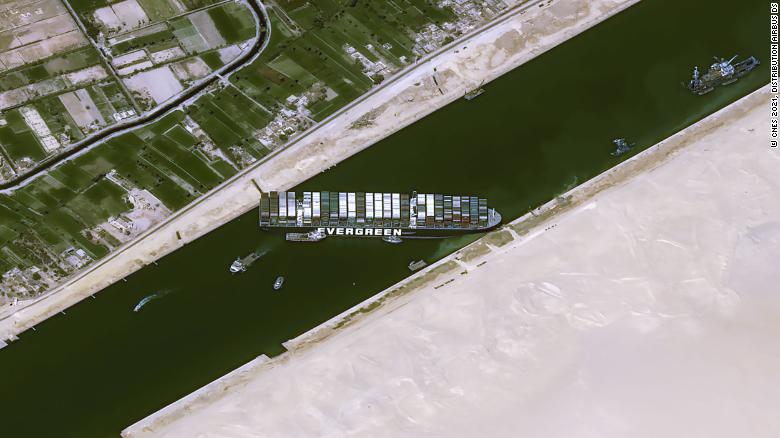 This satellite image, taken on March 25, shows the Suez Canal blocked by the ship Ever Given after it ran aground. 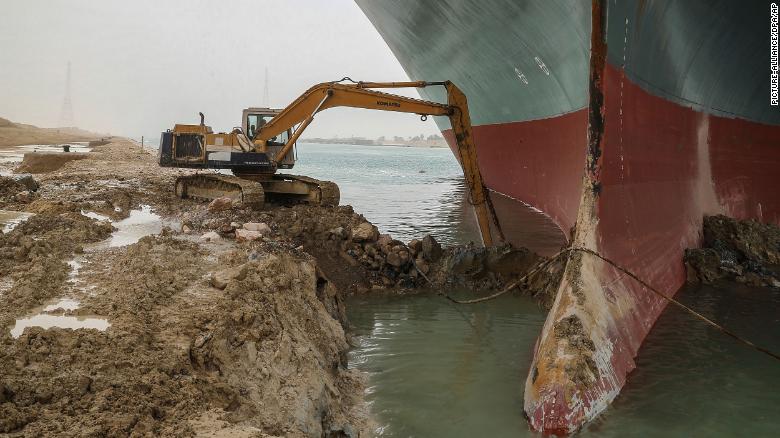 An excavator attempts to free the front end of the container ship.Meanwhile, at least 160 ships carrying vital fuel and cargo are waiting to pass through the blocked waterway, according to a senior canal pilot at the SCA.

Dislodging the vessel could take “days to weeks, depending on what you come across,” according to Peter Berdowski the CEO of Boskalis, whose sister company SMIT salvage is now working to free the ship.

Berdowski told Dutch TV on Wednesday that his company had determined it was impossible to free the ship with its current cargo on board. “The ship with the weight that it [has] now has is impossible to pull,” he said. “You can forget about that.”

The first step would be to remove fuel oil and ballast water from the ship, he added, and try to move it at high tide. If that doesn’t work, staff will have to remove containers and try to dig or flush away the sand banks in which the ship is now lodged, Berdowski said.

SMIT has worked on several high-profile salvage operations in the past, including the Costa Concordia, which was grounded off the coast of Italy in 2012.

A team of salvage experts from SMIT and Japanese company Nippon Salvage has been appointed to help move the ship, the vessel’s operating company Evergreen Marine said in a statement Thursday.The SCA said in a statement that Thursday’s salvage efforts involve the use of two dredgers, nine tug boats and four diggers on the canal bank.

The authority added that it had discussed the option of moving the boat by dredging the area around it during a meeting with the SMIT rescue team.The senior canal pilot at the SCA told CNN Wednesday that re-floating the massive vessel is “technically very complicated” and could take days. 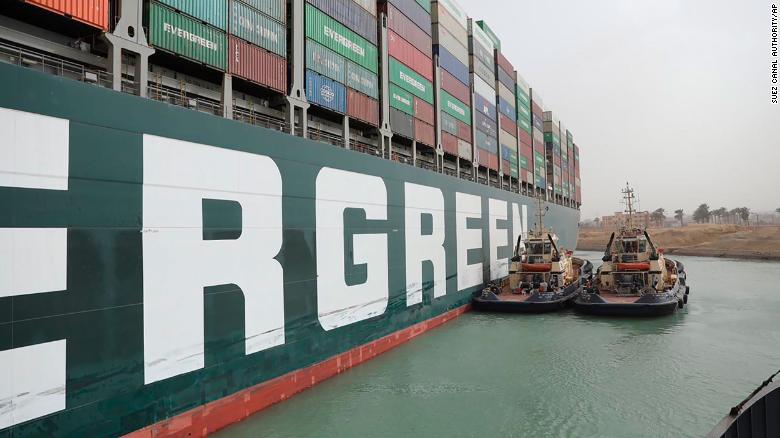 The official — who spoke on condition of anonymity as he’s not authorized to speak to the media — said the equipment to float the ship is available but it depends on how it is used.”If the method is not correct it might take a week, and if it’s done well it might take two days,” he said.

The SCA has officially suspended traffic in the waterway as efforts continue to dislodge the vessel jamming up one of the world’s busiest trade routes.

The vessel, which measures 400 meters long and 59 meters wide, continues to block transit in both directions through the key shipping channel.”There is no solution other than digging around the ship, which is what they are doing now using Egyptian dredges, but the problem is that the soil in this area is rocky, which breaks the heads of the equipment,” the SCA source said.

The source added that SMIT is considering unloading the fuel on board the vessel, but that such a move risks capsizing the ship.”Reducing the loads in such cases must be done from the top, and Egypt does not have a floating crane capable of reaching the height of the containers in the ship,” the source said. 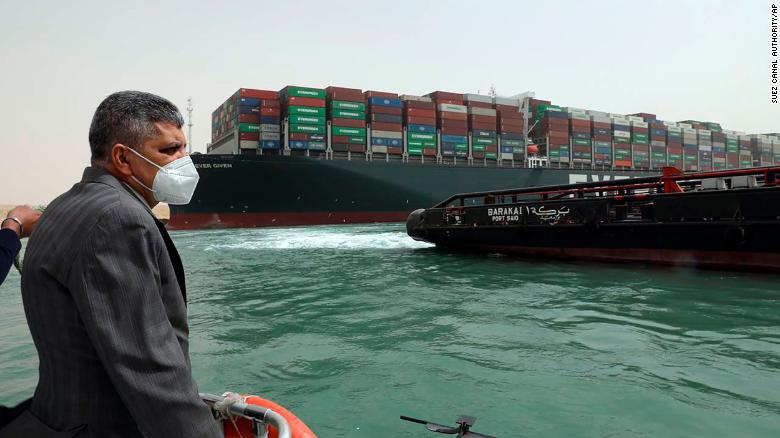 Lt. Gen. Ossama Rabei, head of the Suez Canal Authority, on the scene.

Scores of vessels, including other large container ships, tankers carrying oil and gas, and bulk vessels hauling grain have backed up at either end of the canal to create one of the worst shipping jams seen for years.

On Wednesday, the SCA allowed the ships coming from the Mediterranean to wait in the Great Bitter Lake, but that area has now reached its capacity of 43 vessels, the canal pilot said.

Incoming ships will now anchor in the waiting areas of the Red Sea and the Mediterranean, the source added. Roughly 30% of the world’s shipping container volume transits through the 193 kilometer (120 mile) Suez Canal daily, and about 12% of total global trade of all goods.

Some shipping firms may be forced to reroute vessels around the southern tip of Africa, which would add about a week to the journey. 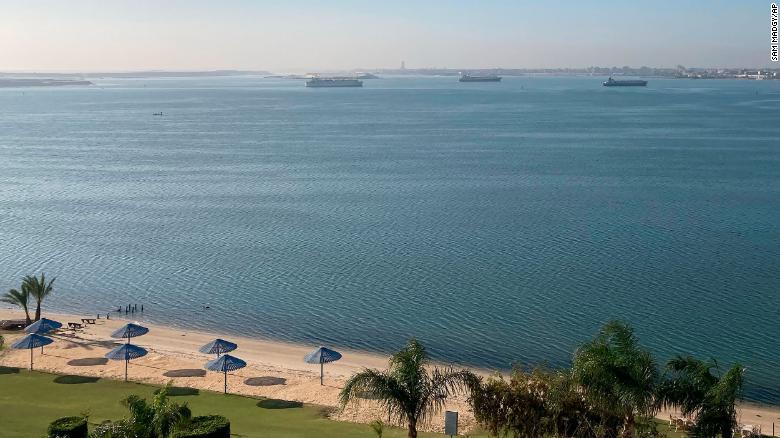 Ships anchored in Lake Timsah, Ismailia, halfway through the Suez canal on Thursday.

The world’s largest container shipping company Maersk said Wednesday that seven of its container ships have been affected by the crisis.Four of the vessels are stuck in the nearby canal system while the rest are waiting to enter the passage, the Danish company said in a statement.”Maersk is constantly monitoring the current situation in the Suez Canal and closely following the refloating efforts of the impacted vessel. Svitzer, our provider of towage and safety services, is taking part in the ongoing refloat operations as requested by the Suez Canal Authority,” the statement added.

Marine services firm GAC issued a note to clients overnight saying efforts to free the vessel using tug boats continued, but that wind conditions and the sheer size of the vessel “were hindering the operation.” 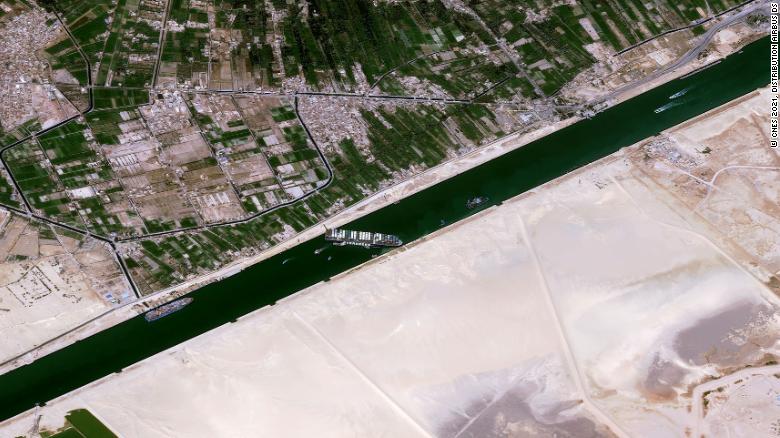 The ship ran aground on March 23 after being caught in 40-knot winds and a sandstorm that caused low visibility and poor navigation, said the Suez Canal Authority.

The Ever Given is owned by Japanese shipping company Shoei Kisen KK, Toshiaki Fujiawara, the senior managing director of the company confirmed to CNN. “This accident gave great trouble to various parties and we assume there would be damages to be claimed,” Yumi Shinohara, vice manager of vessel management, told CNN.

“However at this moment, we are focusing on refloating/getting off the reef, and still we do not know the details as to which parties, how much damage, and how much liability, and so on,” Shinohara added.

“As the vessel is chartered, the responsibility for the expense incurred in the recovery operation; third party liability and the cost of repair (if any) is the owners,” charter company Evergreen Marine said Thursday.