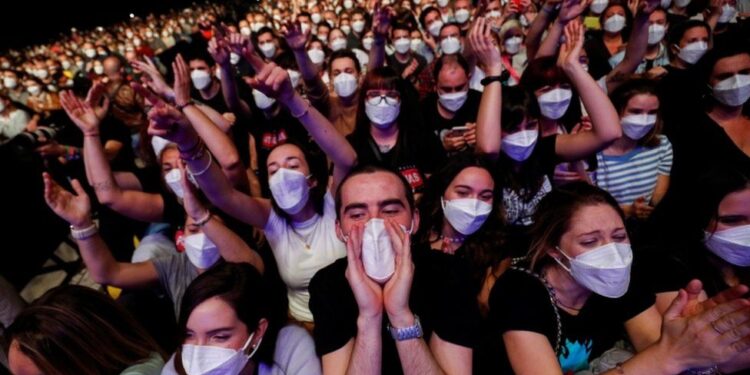 Around 5,000 people spent Saturday night at a gig in Barcelona after receiving negative results in same-day Covid testing.

Spanish authorities let the concert, featuring band Love of Lesbian, go ahead as part of a pilot.

Fans took a test earlier in the day and did not have to keep physically apart but they still wore masks.

It is one of the largest gatherings in Europe in more than a year since the pandemic began.

“This is for one night only, so enjoy it,” one of the hosts said before the concert started at Saint Jordi Arena.

It follows a similar experiment in the Netherlands last week, when fans attended a two-day music festival after showing proof of a negative Covid test.

In Barcelona ticket-holders were only permitted to enter the stadium once a negative result code was sent to their phones. Temperatures and IDs were checked at the door.

Staff from a local hospital and event promoters teamed up to carry out rapid testing in booths within tents at three local venues.

“We expect it to be completely safe. Over the next 14 days we will look at how many of the audience test positive for Covid and will report back,” doctor Josep Maria Llibre told AFP news agency.

“I’m so very, very excited. It’s been 18 months since we’ve been on stage and one of us up here is in tears!” lead singer Santi Balmes shouted to fans from the stage.

“We really wanted to do something different, to take a step towards normality,” one guest told AFP. But Marina Crespo, 25, added that she still tried “not to get too close to people”.

The pandemic has devastated the live music industry along with many other cultural activities. The European music industry lost 76% of its income in 2020, according to a study by Spain’s Music Federation.