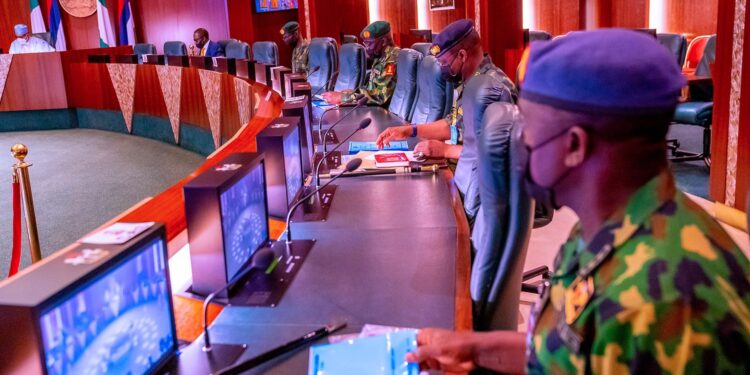 Shortly before his medical sojourn abroad, yesterday, President Muhammadu Buhari, conversed with country’s security chiefs, charging them to crackdown on bandits, kidnappers and their sponsors.

Again, he touted that his administration would no longer tolerate criminality which has been on the rise as at now. The President is currently in the capital city of London, in the United Kingdom for routine medical check-up. According to the National Security Adviser (NSA), Major General Babagana Monguno (rtd), stated: “I’m sending out a message to anybody who thinks he can continue to pool whatever resources at his disposal, to frustrate the efforts of the central government in bringing about peace and security, will have himself to blame.”

He quoted Buhari as decrying the situation where the nation’s military has become reactionary rather than proactive, a development that would not augur well for results.

Monguno further said the President insisted that all resolutions of last month’s National Security Council meeting, including the ban on mining activities in Zamfara and no fly zone directive, remained till security improves in the North West state.

He added that prior to the gathering, Buhari met with Chairman of the Nigeria Governors’ Forum and Ekiti State governor, Dr. Kayode Fayode, on issues directly linked to the state of insecurity in the country.

The NSA noted that yesterday’s parley afforded the President the opportunity to review some issues presented to him in the last one week.

“Mr. President, in particular, emphasized that the comprehensive reports he has received from the Chief of Defence Staff and the service chiefs, following their recent appointment, have illuminated the need for him to look deeper into certain aspects that needed to be taken care of,” he added.

The Nigerian leader, according to him, is unhappy with the widespread criminality in the North.   He continued: “Mr. President has stated very clearly that this problem must be brought to an end, using the traditional methods that the armed forces have been trained to deploy.

“Mr. President has made it very clear to both the intelligence and operational elements that the first assignment will be to identify the leaders of these bandits, kidnappers and take them out to restore confidence in those areas.”

Monguno further said: “He (Buhari) has also indicated his willingness to provide all the resources required by our own troops to put down these criminals. They must be brought down with all the ruthlessness that is required and whoever is working in collaboration with them will be brought to book.”