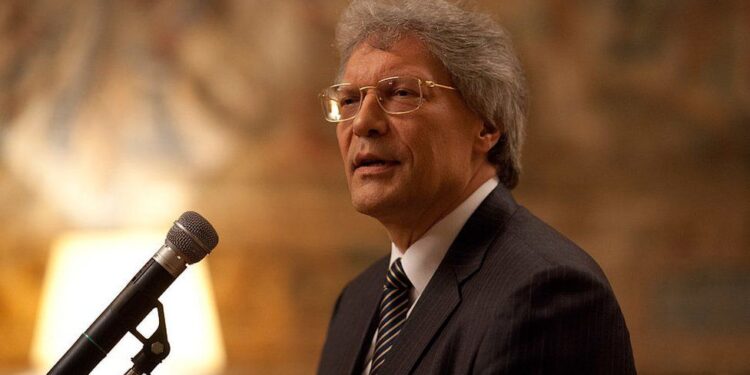 An Italian navy officer has been arrested after being caught in the act of handing secret documents to a Russian military official, police say.

The men were stopped by military police on suspicion of serious crimes relating to espionage and state security.

The Russian, who reportedly worked at the Russian embassy in Italy, is expected to be expelled.

Russia’s ambassador Sergey Razov has been summoned to the foreign ministry in Rome.

Italian Foreign Minister Luigi Di Maio said two Russian officials “involved in this very serious affair” were being expelled with immediate effect. The Kremlin said it hoped the “very positive and constructive nature of Russian-Italian relations will continue” but Russia’s foreign ministry is expected to respond to the expulsions.

What happened in Rome

The carabinieri del Ros special operations group swooped on the men in Rome on Tuesday evening “during a clandestine meeting between the two,” a police statement said.

They were “caught immediately after the transfer of a document by the Italian officer in exchange for a sum of money”, it added.

The Italian is described as being the captain of a frigate and the Russian officer’s diplomatic status is currently being assessed.

Italy’s Corriere website reports that papers seized in the naval officer’s flat suggest he may have passed on Nato secrets, thereby placing other countries’ national security at risk. According to the Ansa news agency, the documents involved military communications.

The Russian embassy confirmed the involvement of a military attaché official but said any further comment was inappropriate.

Kremlin spokesman Dmitry Peskov said “we don’t have information about the reasons for or the circumstances of this detention”. The foreign ministry in Moscow told Ansa that it regretted the expulsions of two embassy staff and would make a further announcement on possible steps in response.

It has the makings of a Cold War thriller: the Italian naval captain handing top-secret files, including Nato documents, to a Russian military attaché for the princely sum of €5,000; the two caught red-handed as police burst in; an arrest, diplomatic expulsions; the risk of 15 years in prison…

But beyond the drama, the story will add to concerns that Italy has become somewhat of a back door for illicit Russian activity in the EU.

Rome is one of the more Moscow-friendly members. In 2019, an Italian and Russian were arrested for colluding to steal trade secrets from an American aviation company.

Prosecutors are investigating whether Russians tried to siphon funds to the League party of Matteo Salvini.

And when the coronavirus pandemic exploded in Italy last year and the EU was slow to help, Moscow despatched supplies under the banner “From Russia with Love” – an operation that some here believed raised security fears given the large number of military officers sent in.

Russian decline in relations with Nato

Police moved in following a lengthy operation by Italy’s Aisi domestic intelligence agency. Italian media are describing the incident as the most serious since the Cold War.

When US President Joe Biden said this month that he considered Russia’s Vladimir Putin “a killer”, the foreign ministry in Moscow demanded an explanation and Mr Putin retorted that “it takes one to know one”.

Italian fighter planes were involved in a Nato operation to intercept Russian planes over the Baltic Sea on Monday.