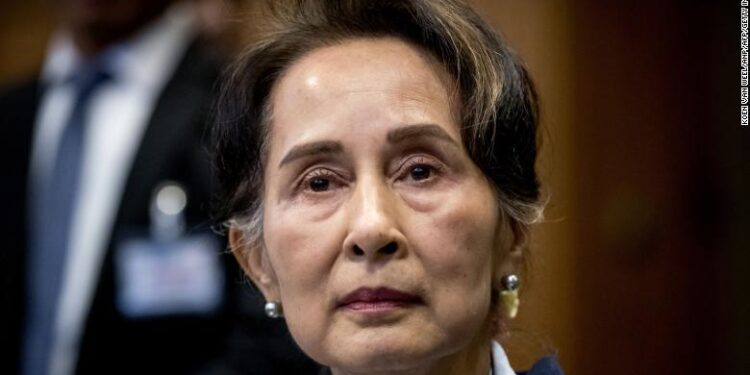 Suu Kyi’s charge of breaking the British colonial-era law is the fifth and most serious charge leveled against her since the military seized power in a coup on February 1. A conviction can carry a prison sentence of up to 14 years, according to Reuters.

Pro-democracy demonstrators have repeatedly filled streets across the country for nearly two months in protest over the military’s bloody takeover, which overthrew Suu Kyi’s elected National League for Democracy (NLD) government over claims of election fraud, and installed a ruling military junta.

Suu Kyi and other government officials have been detained since the coup. She faces four other charges, including violating the import-export law and prohibiting publishing information that may “cause fear or alarm.”

Her lawyer, Khin Maung Zaw, told CNN Suu Kyi was charged on March 25 alongside detained Australian economic adviser Sean Turnell and several other advisers. He said he was only informed of the new charge on March 30.

The ousted civilian leader, whose party won a landslide in the November 2020 elections, has not been seen in public since her detention. Appearing in court via a video link on Thursday, Khin Maung Zaw said she seemed to be in “good physical condition,” according to a junior lawyer who was present at the hearing.

“She demanded to arrange a meeting between her and the lawyers — the defense lawyers — a private meeting to give instructions to her lawyers to discuss about the case without any outside interferences like the police or other force,” Khin Maung Zaw said.

On Friday, Myanmar citizens were expecting to wake up to no wireless broadband internet services after telecoms companies received instructions from the Ministry of Transportation and Communications to stop the service.

Customers of telecoms company Ooredoo received text messages the night before saying wireless services will be stopped until further notice. The directive was dated from April 1.

Anti-coup demonstrators raise the three finger of resistance and a portrait of deposed leader Aung San Suu Kyi as prepare to confront police during a protest in Tarmwe township, Yangon on April 1.

A majority of customers in Myanmar connect to the internet through wireless data services and the move will leave only those with physical connections to access the web.

In an effort to stifle communication and the flow of information, the junta has imposed nightly internet shutdowns. Internet monitor Netblocks confirmed the internet was cut from 1 a.m. Friday morning — the 47th consecutive night of military-imposed shutdowns. Mobile data has also been disabled for the 19th day, the company said.

CNN has reached out to Myanmar’s military for comment.

UN condemns ‘use of violence’

Late Thursday, the United Nations Security Council issued a statement to the press condemning the “use of violence” against protestors in the streets of Myanmar.

The response to ongoing protests by security forces has seen unarmed civilians shot in the street, and beatings, arbitrary detentions and nighttime raids on the homes of suspected opposition members. At least 543 people have been killed by junta forces, according to advocacy group the Assistance Association of Political Prisoners.

“Members of the Security Council expressed deep concern at the rapidly deteriorating situation and strongly condemned the use of violence against peaceful protestors and the deaths of hundreds of civilians, including women and children,” the UN Security Council statement said.

In order to get the support of China and Russia, Western countries were forced to modify the language used in the statement. The final UNSC statement, the third issued by the Council since the coup, did not threaten Myanmar military rulers with sanctions or an arms embargo.

Demonstrators burn a copy of Myanmar’s constitution during a protest against the military coup in Mandalay, Myanmar, on April 1.

A UN diplomat told CNN that countries wanted to include the phrase “a readiness to consider further steps” — a reference to the possibility of sanctions — but China, Myanmar’s strongest defender in the 15-nation council, blocked the language, said the diplomat.

Russia wanted to include language condemning the death of Myanmar security officials, which stopped approval of the final text several times, according to the diplomat.

It comes after the Security Council concluded its meeting Wednesday with no immediate sign of any agreement on more aggressive actions on Myanmar.

Diplomats at the UN still insist it is important for the Council to speak with one voice. Russia’s deputy UN Ambassador told reporters Wednesday that sanctions would represent intrusion into the internal affairs of a member country of the UN.

Since Saturday, the military has been conducting airstrikes in Karen state, as tensions increase between armed ethnic groups in the country and the military. Thousands of residents have been forced to flee into the jungle and into neighboring Thailand.

Many of the villages targeted are controlled by the Karen National Union (KNU), an ethnic armed group that holds large swathes of territory in the borderlands. The KNU is one of many ethnic armed groups to have come out in support of the protests and to condemn the military takeover.

Protesters wearing face paint stand near a burning barricade during an anti-coup demonstration in Yangon, Myanmar, on Tuesday, March 30.

Free Burma Rangers said strikes occurred in areas that were previously targeted and that there were no casualties as residents were in hiding. Burma Campaign UK also reported two more airstrikes in the state early Thursday, in statement on Twitter.

Members of the KNU shared a video with CNN that purports to show the aftermath of an airstrike at a gold mine in Dwe Lo, township, in Papun district on March 30. Multiple bodies could be seen on the ground and fires burned at what appeared to be a work site.

In a statement on state television Wednesday, the military said it would suspend its “operations unilaterally from April 1 to April 30,” but that it would reserve the right to take action against those who “threaten to disrupt the government, security and administration.”

Taiwan: Dozens killed as train crashes and derails in tunnel