Taiwan: Dozens killed as train crashes and derails in tunnel 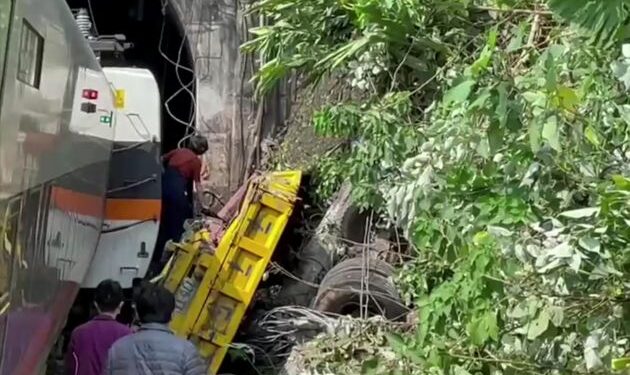 At least 41 people have died and up to 200 remain trapped after a train carrying nearly 500 people crashed and then derailed in a tunnel in Taiwan.

The eight-carriage train reportedly hit a construction vehicle that had slipped onto the tracks at the tunnel’s mouth.

The train, from the capital Taipei to Taitung, was carrying people travelling for a long-weekend annual holiday.

Many people may have been standing because the train was so full.

The 408 train is one of the fastest deployed on a network that is generally considered safe. It can reach speeds of 130km/h (80mph).

The latest reports from the National Fire Agency say 490 people were on the train, with 41 dead and more than 60 injured.

Some people at the back of the train were able to walk away unscathed, but 100 were rescued from the first four carriages and about 200 more remain trapped.

“It felt like there was a sudden violent jolt and I found myself falling to the floor,” one female survivor told Taiwan’s UDN. “We broke the window to climb to the roof of the train to get out.”

Another rescued woman said: “My whole body fell to the floor. I hit my head and it started bleeding.”

Local media reports say the train driver is among the dead.

Images show a large, yellow flatbed truck lying at the side of the tracks. A construction project has been under way near the north end of the tunnel.

It is not known how the vehicle slipped down the embankment.

Other pictures online showed people walking along the tracks with their belongings as they were evacuated from less badly affected carriages. Other survivors were being carried away on stretchers with their necks in braces.

Many of those on the train are believed to have been travelling to celebrate the Tomb Sweeping festival – a time when people pay their respects to the dead by visiting the graves of friends and family, sprucing them up and making offerings to their spirits.

Friday’s crash could be the island’s worst rail disaster in decades.

The last major train derailment in Taiwan was in 2018, which left 18 people dead.

The island’s worst crash in recent history was in 1991, when 30 passengers were killed and 112 injured after two trains collided.