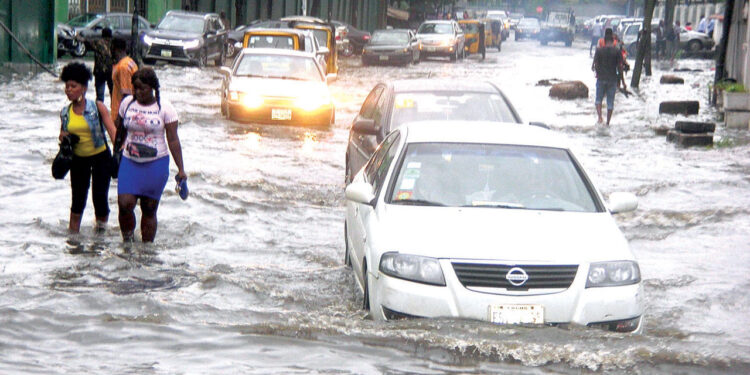 Residents of Isheri-Oshun in Igando-Ikotun council area of Lagos State have begged the state government to fix inner roads in White Sand Community to forestall the usual flooding during the rainy season.

Alhaji Hakeem Oladipupo, the Chairman, Isale-Ijon Community Development Area (CDA) in Isheri-Oshun area, said the state of the road remained the same in spite of the efforts of members of the community.

“The water that was supposed to go into the canal, under Isheri bridge was channeled into the community, making the community to be flooded during rainfall.

“It is sad that in spite of all our efforts as a community to ensure that the incessant flooding that affects our lives during the rainy season becomes a thing of the past, nothing is being done by Lagos government.

“Last week, I was at Alausa secretariat to meet with state government engineers; the problem became worse when water from the main road (Isheri-Ijegun road) was channelled into our community instead of under the bridge,” Oladipupo lamented.

He said residents of the community were always worried whenever the rainy season approached, hence the appeal to the government for urgent intervention.

“We want them to come to our rescue, we voted for them, we deserve to be listened to, we are tax-paying citizens.

“We usually task ourselves then for those who have building projects; we usually ask that they bring two trucks of red sand to fill the roads, then for the main road users we task them two thousand naira,” he said

Oladipupo said the community had approached the state Ministry of Works for assistance to dredge the canal.

The community, consisting of 15 Community Development Associations with over one million residents, said they were yet to feel the presence of the Lagos State government in terms of basic infrastructure.

Alhaji Sikiru Sarumi, the Chairman Ajaye CDA, also said several letters had been written to the Lagos State government, through the Offices of the Special Adviser to the Governor on Public Work and Drainage.

He said others were addressed to the Permanent Secretary Ministry of the Environment, Lagos State Public Advice Centre as well as the office of Governor Babajide Sanwo-Olu, requesting assistance in dredging the canal.

“Most times when we write they usually respond. In fact, they usually sent engineers to come and inspect but after that no feasible action.

“We have written series of reminders yet no action, when it starts to rain, the road is usually submerged,” he said.

Sarumi said dredging and construction of canals were huge tasks for the local government to embark upon, urging the state government to clamp down on those whose buildings were blocking the canals.

“The local government cannot handle this in all honesty, it is bigger than them, we need the state government to intervene.

“Take for instance a signpost put up by the government that some areas are drainage channel, that’s where some people choose to build their houses.

“As community leaders, there is little or nothing we can do, but if the state government takes charge, they will do the needful,” he said.

Mr. Seyi Adekoya, a resident at Osas street said: “This year’s rain is yet to begin and it’s a mess, we just want to appeal to the government to come to our aide.”

For Mrs. Agnes Ajayi, living in White-Sand during the rainy season is filled with unpleasant memories.

“Whenever the rain gets heavy my children and I move to my sister’s house at Ijegun; it’s not easy.

“Transportation becomes something else, as a community, we have tried but we need government to step in,” she said.