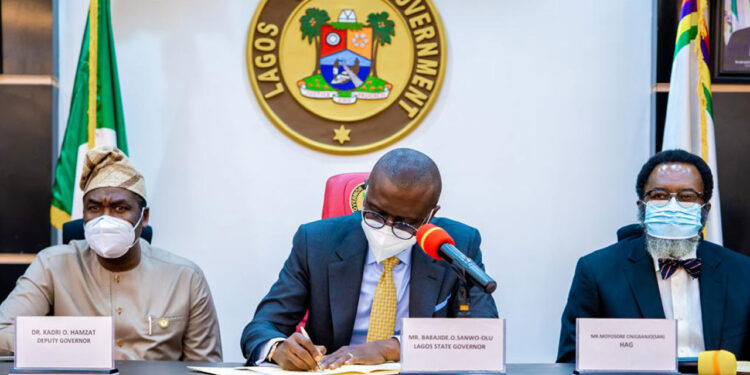 The Federal Government is against the proposed Lagos State Public Complaints and Anti-Corruption Commission, according to the Minister of Justice and Attorney-General of the Federation, Abubakar Malami (SAN).

Malami stated that no state law can override the Constitution.

The minister was on Politics Today, a current affairs programme on Channels Television on Wednesday, where he criticised the move by the Lagos State Government to create a semblance for the Economic and Financial Crimes Commission and the Independent Corrupt Practices and Other Related Offences Commission.

Recall that, on April 25, that a new law signed by Governor Babajide Sanwo-Olu of Lagos State mandates agencies like the EFCC, ICPC, and other anti-graft agencies, to hand over corruption cases to the state government.

According to the legislation titled ‘Lagos State Public Complaints and Anti-Corruption Commission Law’, the new anti-corruption agency will have the exclusive rights to investigate financial crimes and corruption cases involving the finances of the Lagos State Government.

The new law, which will ensure the creation of a Lagos State anti-corruption agency, mandates all other agencies investigating the finances of the state to hand over the case to the state government.

According to the law, the commission shall have the power to investigate any person or administrative action taken by any ministry, department, agency or parastatal of the state government or any local government.

The new anti-graft agency shall investigate any offence under the criminal law of the state in relation to corruption and financial crimes, abuse of office, offences relating to administration of justice, obtaining by false pretences, cybercrime, fake news, interception of emails and fraudulent dealing with property debtors.

The law, which empowers the agency to investigate anyone who cannot explain his or her source of income, states that the anti-graft agency shall not be subjected to the direction and control of any authority.

However, the AGF pointed out that federal law cannot be subservient to state law.

Malami partly said, “The position of the Federal Government is a position that bothers on law, and l the law is clear: where there is an inconsistency between federal law and state law, the state law naturally gives way. So, I think it is a function of law. We will look at it. We have been looking at it from the perspective of law and we shall do the needful within the context of consistency or otherwise.”

When asked if he felt that the proposed law was conflicting with the Constitution, Malami said, “There is no doubt; there is no way you can make a local or, perhaps, a federal law subservient to local law. It is a constitutional provision. Even in the context of law formation or legislation, the state must naturally operate within constitutional bounds.

“We will certainly do the needful to ensure due compliance with the constitutional tenets as far as this country is concerned. We will do the needful. I am not giving you a clear-cut position but no possibility out ruled as far as ensuring the supremacy of the federal legislation.”