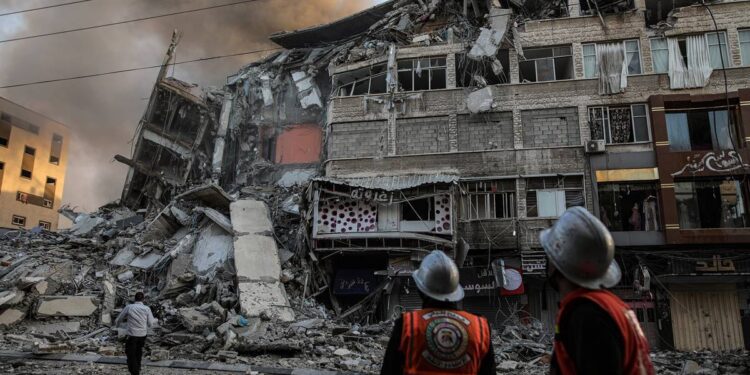 Thousands of people in the Gaza Strip and across the occupied Palestinian territory poured into the streets to celebrate a ceasefire between Israel and Palestinian armed groups.

The ceasefire, which was welcomed internationally, was brokered by Egypt in the early hours of Friday after 11 days of relentless bombing of the besieged enclave and thousands of rockets launched into Israel by Hamas, the group ruling the Strip.

A statement from Israeli Prime Minister Benjamin Netanyahu’s office said late on Thursday the security cabinet had “unanimously accepted the recommendations to accept an Egyptian initiative for an unconditional … ceasefire”.

Palestinian groups Hamas and Islamic Jihad then confirmed the ceasefire in a statement, saying it would come into force at 2am on Friday (23:00 GMT on Thursday).

Israel’s bombardment of Gaza killed 243 Palestinians, including 66 children, and brought widespread devastation to the already impoverished territory. On the Israeli side, 12 people, including two children, were killed.

World should know about ‘terror state of Israel’: Turkish president

Turkey will continue to show the world how the map of Palestine changed since the start of the Israeli occupation, said Turkish President Recep Tayyip Erdogan.

“The whole world should know what this terror state of Israel is,” Erdogan said at the opening ceremony of the seventh section of the North Marmara Motorway.

Highlighting Thursday’s UN General Assembly meeting on Palestine, Erdogan said a “successful session” was held under the presidency of Volkan Bozkir, a Turkish diplomat, and with the attendance of Turkish Foreign Minister Mevlut Cavusoglu, as well as other foreign ministers that stand together on the issue.

“They talked about how Palestine was occupied by this terror state of Israel since 1947, and was turned into a (small) piece of land today,” Erdogan said

Israeli air raids on Gaza damaged at least 51 education facilities, including 46 schools, two kindergartens, a UN training centre, and parts of the Islamic University of Gaza, according to the United Nations’ latest humanitarian report.

At least 66,000 people are still sheltering in 58 UN-run schools across the Gaza Strip. Israeli raids also damaged at least six hospitals and 11 primary healthcare centres, including Gaza’s only COVID-19 testing laboratory that was left inoperable following an Israeli attack that hit a nearby building on May 17.

Gaza’s electricity network also suffered damage, leading to 20-21 hours of daily power outages. This has affected water and sanitation facilities across the strip, leaving at least 250,000 people without access to drinking water.