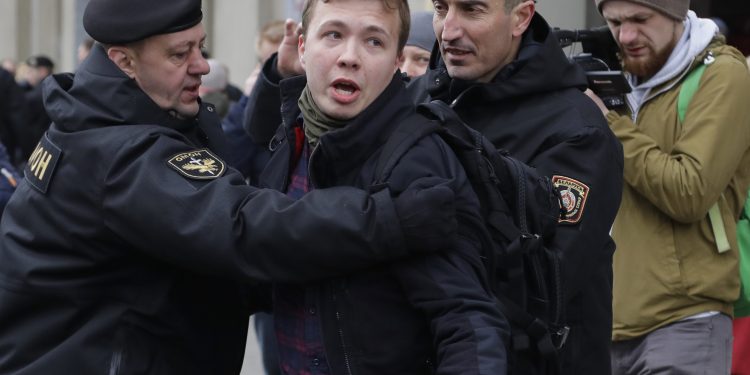 A leading Belarusian opposition activist has been arrested in Belarus after President Alexander Lukashenko ordered a fighter jet to escort his Ryanair plane to Minsk, according to Pull Pervogo, Belarusian state broadcaster.

Raman Pratasevich, in exile and a vocal critic of Lukashenko‘s regime, was detained at Minsk airport, the Belarusian Ministry of Internal Affairs said Sunday.

The original flight route was from Athens, Greece, to Vilnius, the Lithuanian capital, a path that crosses through Belarus.

Ryanair said in a statement the flight was informed of a “potential security threat on board” by Belarus air traffic control and told to make an emergency landing at the nearest airport, in Minsk. After landing, the passengers disembarked and local authorities carried out security checks.

“Nothing untoward was found and authorities cleared the aircraft to depart together with passengers and crew after approx. 5 hrs on the ground in Minsk.”

The airline said it has “notified the relevant national and European safety and security agencies,” and apologized to the passengers for the delay, which was “outside Ryanair’s control.”

Afterward, the Ryanair flight took off for Vilnius, according to European Commissioner for Transport Adina Valean.

Former chief editor of a Telegram channel Nexta Raman Pratasevich, shown here in August 2020, was detained in Minsk onboard a Ryanair plane that made an emergency landing in the Belarusian capital.

Pratasevich is the founder of the Telegram channel Nexta, which was broadly used to organize anti-government protests, and another similar channel critical of the government, both of which are classified as extremist in Belarus. He is also on a government wanted list for terrorism.

Lukashenko, who has been in power since 1994, was abruptly inaugurated into office for his sixth consecutive term last September following a disputed election that the European Union said was not legitimate. Amid mass protests in Belarus last summer, Lukashenko and the state security apparatus forcibly removed from the country or detained leading opposition figures.

Lithuanian President Gitanas Nauseda has demanded Belarus release Pratasevich. He called the incident “abhorrent” and an “unprecedented event” in a tweet. He said a “civilian passenger plane flying to Vilnius was forcibly landed in Minsk.”

The Belarusian “regime is behind the abhorrent action,” he tweeted and demanded Pratasevich is freed “urgently.”

There are differing reports as to why the budget airline Ryanair plane was forced to land.

The Minsk airport told Russian state media RIA Novosti that the plane made the emergency landing after an unconfirmed bomb threat.

However, a spokesperson for Lithuania airports told LRT National Radio that it was due to a conflict between a passenger and one of the crew members. Lina Beishene said the Lithuanian civil aviation authorities have not been informed about a bomb threat.

On Twitter, leading opposition figure Sviatlana Tsikhanouskaya said the Belarusian regime “forced the landing of the plane in Minsk to arrest journalist and activist Raman Pratasevich. He faces the death penalty in Belarus. We demand the immediate release of Raman, an @ICAO (international aviation group) investigation and sanctions against Belarus.”

US Ambassador to Belarus Julie Fisher condemned the government in a series of tweets Sunday.

“Lukashenka and his regime today showed again its contempt for international community and its citizens,” Fisher wrote. “Faking a bomb threat and sending MiG-29s to force @RyanAir to Minsk in order to arrest a @Nexta journalist on politically motivated charges is dangerous and abhorrent.”

“Private travelers cannot be subject to diversion and delay by the whims and machinations of a vindictive regime,” she added. “The American citizens and all others on @RyanAir must be allowed to travel to Vilnius. #StandWithBelarus

“Lukashenka’s unrestrained efforts to imprison and silence political foes hurts the country’s people, its international reputation, as well as its economy,” she said.

The Foreign Minister of Lithuania said the news of the forced landing was disturbing. Gabrielius Landsbergis tweeted that he is “working with international partners to secure safe passage back to Vilnius for all passengers.”

EU leaders are also speaking out in condemnation of Belarus for arresting Pratasevich.

David Sassoli, President of the European Parliament, demanded “immediate explanations” and for Pratasevich to be released.

“Closely following reports of forced landing of a Ryanair flight in Minsk and the alleged arrest of activist and journalist (Raman Pratasevich). We need immediate explanations, and he must be released. All 171 passengers and the flight need to be released without delay,” he said.