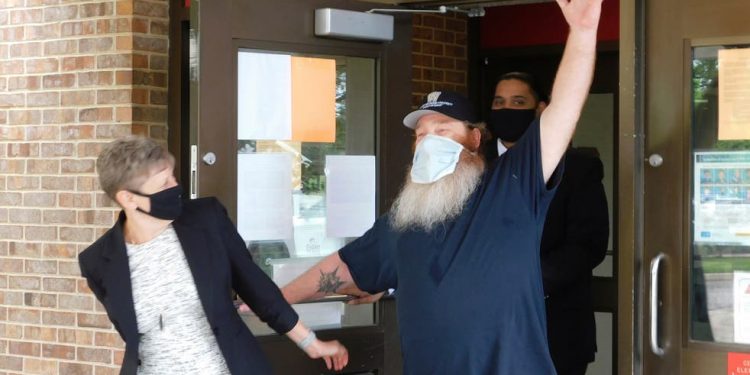 Poole could be able to claim as much as $1.6m (£1.1m) under a Michigan law that awards money to people wrongly convicted.

A man has walked free from prison after 32 years after his murder conviction was overturned due to new evidence.

Gilbert Poole Jr, 56, was jailed for the murder of Robert Mejia in 1988 in Detroit, Michigan.

He had always challenged the ruling – despite his girlfriend at the time saying he confessed carrying out the stabbing to her.

His release comes following a breakthrough in the case in 2015 – when blood which did not match either Poole or Mejia was discovered at the scene.

A judge dismissed Poole’s conviction, and hours later he was released on Wednesday from a prison in Jackson.

He said in court: “I spent decades learning, reading, studying law, but none of that was working for me.

Poole was helped in his endeavours by the Innocence Project at Western Michigan University Thomas M. Cooley Law School.

Michigan Attorney General Dana Nessel said the county prosecutor’s office, which led the case at the time, had no objection to the conviction being vacated.

She said: “If we only knew then what we know now, Mr Poole would never have spent the past three decades in prison for a murder he did not commit.”

At the time it was claimed that bite marks on Meija’s body matched Poole’s dental records – but this kind of evidence “has been widely debunked. It’s not reliable anymore,” Ms Nessel said.

The attorney general added that Poole will be able to claim a range of post-prison services, like housing.

She did not comment on how much money Poole may or may not receive.