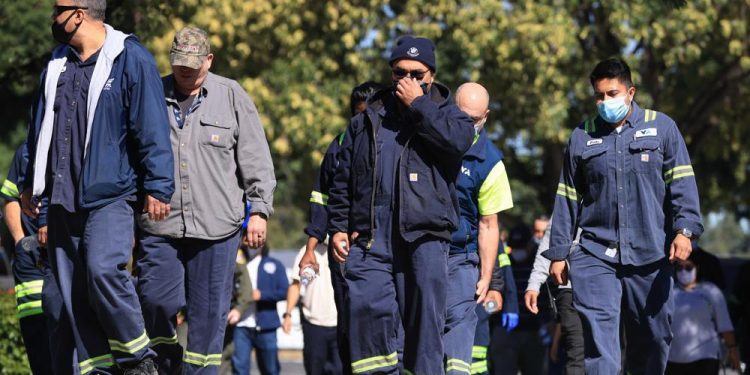 The alleged attacker, an employee of the California city’s transit service, killed at least eight at a local rail yard.

Authorities in the US state of California say eight people have been killed and several others injured after a gunman opened fire at a train yard in San Jose, the latest in a recent uptick of mass shootings across the United States.

Officials said the alleged attacker, confirmed to be a VTA employee, died from a self-inflicted gunshot wound.

“When our deputies went through the door, initially he was still firing rounds. When our deputy saw him, he took his life,” Santa Clara County Sheriff Laurie Smith told reporters.

Earlier on Wednesday, Sheriff’s Deputy Russell Davis confirmed that at least eight people had been killed, while multiple victims were being treated for “major injuries”. The identities of the victims have not yet been released.

The deadly attack, which drew messages of concern and condemnation from US lawmakers, is the latest of several recent mass shootings in various parts of the country.https://4d5c89082dbb1b9960e800d1bddc100d.safeframe.googlesyndication.com/safeframe/1-0-38/html/container.html

Multiple local news outlets identified the alleged shooter as 57-year-old Samuel Cassidy, who was a technician at the light rail yard. Authorities have not yet confirmed the shooter’s name and have yet to offer information on a possible motive.

Cassidy had worked for the transit authority since at least 2012, when he was listed as an “electro-mechanic”, and he was promoted to “substation maintainer” in 2015, according to records posted by the nonprofit website Transportation California.

Al Jazeera’s Rob Reynolds, reporting from San Jose, said the bomb squad “is going very meticulously over the entire scene” where the shooting took place and is expected to work through the night, after police received information about possible explosive devices.

San Jose Mayor Sam Liccardo said he was aware of news reports of a fire at Cassidy’s house earlier in the day.

“That is certainly the information that I have, is that there was a fire at the shooter’s home, there was nobody found inside the home, thank God,” Liccardo told television station KGO. “This is every mayor’s worst nightmare.”

Multiple fire department, police and bomb squad vehicles were parked outside the suspect’s house, along a cul-de-sac in southeastern San Jose, hours after the shooting.

An explosives-detecting robot sat in the street near the home while two bomb squad technicians entered the ranch-style house. Arson investigators along with agents of the FBI and US Bureau of Alcohol, Tobacco, Firearms and Explosives were also present.

Glenn Hendricks, the chairman of the VTA board of directors, said the shooting happened in the light rail maintenance yard, where vehicles are repaired and dispatched, not inside the train system’s operations control centre.

The city of San Jose, which has a population of just over one million, is located about 67km (42 miles) southeast of San Francisco and is in the heart of Silicon Valley.

The region is a major technology hub and home to Apple, Facebook and Google, among many other tech companies.

District Attorney Jeff Rosen said grief-stricken families sat huddled together after learning they had lost a loved one.

“They’re just sitting and holding hands and crying,” Rosen said. “It’s terrible. It’s awful. It’s raw. People are learning they lost their husband, their son, their brother.” He said about 100 people were inside a family reunification centre.

Mass shootings have become commonplace in the US, with at least 12 people killed in such incidents across the country during the past weekend.

Over four weeks in March and April, the US saw three such shootings that involved mass casualties: On March 16, eight were killed, including six women of Asian descent, at Atlanta-area spas; less than a week later, 10 died at a supermarket shooting in Colorado and a few weeks after that, eight were killed at a FedEx facility in Indianapolis.

Nearly 40,000 Americans die each year due to guns, with half of that total being suicides.

In recent years, Democrats have called for universal background checks, which are broadly popular among Americans, as well as a ban on military-style “assault” weapons, but conservatives remain steadfastly against strict, new gun control measures.

The White House said Biden had been briefed on Wednesday’s shooting by his US Homeland Security adviser, Liz Sherwood-Randall.

Vice President Kamala Harris, a former California attorney general and US senator, noted she has family in San Jose and called the shooting “absolutely tragic”.

“My prayers and thoughts are with all of those families affected,” she said.

Airbnb CEO: Business travel won't ever go back to what it was pre-pandemic