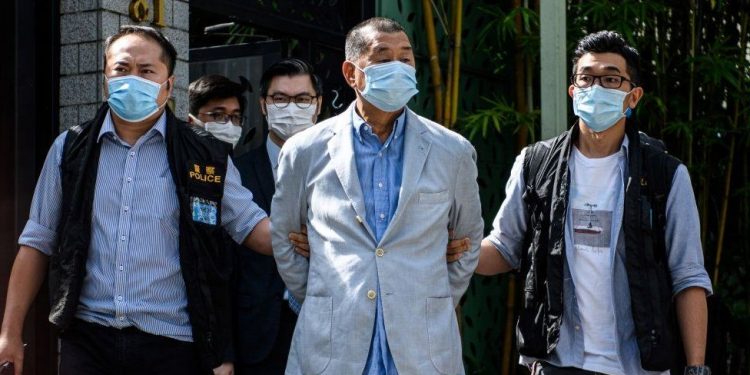 Hong Kong pro-democracy media mogul Jimmy Lai has been sentenced to 14 months in prison for participating in an unauthorised assembly in 2019.

Lai, 73, is currently already serving time for participating in other demonstrations that year.

He will serve part of his new sentence consecutively, meaning Mr Lai faces a total of 20 months in jail.

The verdict comes as mainland China is increasingly cracking down on Hong Kong’s rights and freedoms.

Lai is among ten prominent activists who were sentenced on Friday for participating in an unlawful assembly on 1 October 2019.

Other activists include Figo Chan, Leung Kwok-hung, known as “Long Hair”, and Lee Cheuk-yan – who were sentenced to 18 months in jail. Leung and Lee are currently both in jail and will also serve their sentences consecutively.

At the sentencing on Friday, Judge Amanda Woodcock said she found claims by some of the defendants that their march on 1 October would be peaceful to be “naïve and unrealistic”, according to a Reuters report.

The protests on China’s national day saw major clashes between protesters and police, with the police chief later calling it “one of Hong Kong’s most violent and chaotic days”.

The tycoon faces at least two other charges imposed under the country’s new national security law, which can carry a maximum term of life in prison.

Lai is one of the most prominent persons to be arrested under the law, which criminalises secession, subversion, terrorism and collusion with foreign forces.

It makes it easier to punish protesters, and reduces Hong Kong’s autonomy.

Who is Jimmy Lai?

Lai is one of the most prominent supporters of Hong Kong’s pro-democracy movement.https://emp.bbc.com/emp/SMPj/2.43.0/iframe.htmlmedia captionJimmy Lai: The Hong Kong billionaire becomes emotional as he faces prison

Estimated to be worth more than $1bn (£766m), he made his initial fortune in the clothing industry and later ventured into media and founded Next Digital.

Next Digital publishes Apple Daily, a well-read tabloid which is frequently critical of Hong Kong and mainland Chinese leadership.

Earlier this month, authorities froze assets belonging to Lai, including his bank accounts and his stake of 71.26% in Next Digital – estimated to be worth $45m (£31m).

Banking giants HSBC and Citibank were also sent letters by Hong Kong’s security chief, who threatened up to seven years’ jail for any dealings with Lai’s accounts in the city.

In his last interview with the BBC before he was sentenced to jail, he said he would not give in to intimidation.

“If they can induce fear in you, that’s the cheapest way to control you and the most effective way and they know it. The only way to defeat the way of intimidation is to face up to fear and don’t let it frighten you,” he said.

What’s the background to this?

Britain handed back Hong Kong to China in 1997, and the Basic Law was created under the handover agreement under the “one country, two systems” principle.

This is supposed to protect certain freedoms for Hong Kong: freedom of assembly and speech, an independent judiciary and some democratic rights – freedoms that no other part of mainland China has.

But fears that this model was being eroded led to huge pro-democracy protests in 2019.

Some protests turned violent and in 2020, China introduced the national security law in the territory.

Beijing said the law would target “sedition” and bring stability. Since the law has been enacted in June, around 100 people have been arrested.