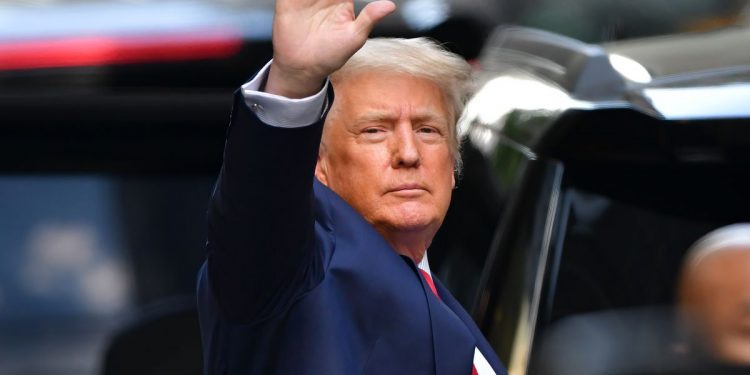 Donald Trump has shut down his blog, with no plans for the page to return to his website.

The former president launched the “From The Desk of Donald J. Trump” platform less than a month ago, after he was banned from multiple social media outlets.

However, it has now been removed from his website.

One of Mr Trump‘s aides, Jason Miller, told Sky News affiliate CNBC the page “will not be returning”.

He added that “it was just auxiliary to the broader efforts we have and are working on”, without elaborating on what those efforts were.

“Hoping to have more information on the broader efforts soon, but I do not have a precise awareness of timing,” Mr Miller said.

People are still able to sign up for email alerts from the former president, who was removed from Twitter and Facebook following the 6 January riots in Washington DC.

Mr Trump and his allies have been critical of the companies for perceived bias against “conservative voices”.

The 45th US president became well known during his term in the Oval Office for extensive social media use, with policy announcements sometimes coming through his Twitter account instead of traditional channels.

He would also insult critics, including other world leaders, and make false claims – especially after he lost the 2020 presidential election.

The new section of his website carried statements which looked very similar to what had been posted on Mr Trump’s Twitter feed.

But it struggled to gain the same kind of traction as his social media activity used to receive.

Mr Trump has made some appearances in more traditional media since leaving office in January, but this has been with friendly outlets like Fox News.

The 74-year-old has hinted that he will run for re-election to the White House in 2024.