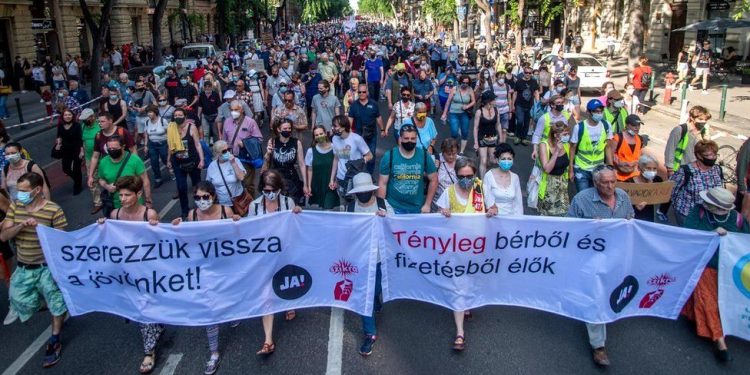 Thousands of people marched through Budapest to protest against plans to open a Chinese university campus in the Hungarian capital.

Opponents of the project say it will undercut the country’s own higher education and increase the influence of China’s Communist authorities.

The right-wing government of PM Viktor Orban has close ties with Beijing.

On Saturday, demonstrators opposing the plan to build China’s Fudan University campus in Budapest marched through the city’s streets to the parliament building.

“Orban and [his right-wing party] Fidesz portray themselves as anti-communists, but in reality the communists are their friends,” university student Szonja Radics, who was at the march, told AFP news agency.

Another student demonstrator, named only as Patrik, said that any government funds planned for the Fudan University project should instead be used “to improve our own universities”, Reuters reported.

The construction of the Fudan University campus in Budapest is estimated to cost about $1.8bn (£1.2bn). This is more than the Orban government spent on its entire higher-education system in 2019.

Some $1.5bn of the costs will be provided by a loan from a Chinese bank, documents obtained by Direkt36, a Hungarian investigative-journalism outlet, showed.

Around two thirds of Hungarians do not support the Chinese university, according to liberal think tank Republikon Institute.

The campus is also opposed by Mayor of Budapest Gergely Karacsony, who announced earlier this week that he was naming streets in the area after the victims of China’s human rights violations.

Fudan University is one of China’s most prestigious educational institutions. The campus in Budapest, which is expected to be finished by 2024, will be its first site in the European Union.