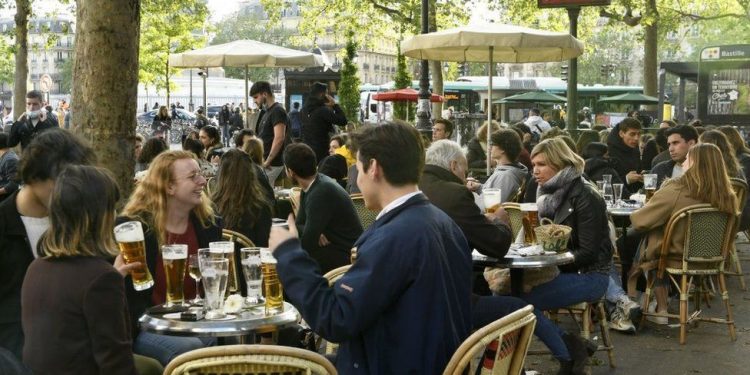 France and Belgium have both entered their next phase for reopening in time for summer.

In France, bars, restaurants, gyms and swimming pools are welcoming people indoors for the first time in seven months.

Belgium is also easing its rules to allow indoor dining at cafes and restaurants.

Both countries retain some limits, however, with numbers of customers restricted in both cases.

What are the rules in France?

In France, restaurants and bars can now operate at 50% capacity indoors. Gyms and indoor swimming pools are also only able to admit half of their maximum capacity.

Outdoor terraces, which were allowed to open with restrictions last month, will now be able to operate at full capacity.

Renowned bistro chef Yves Camdeborde told French radio “we feel happy and a little relieved after the months we’ve just gone through which have been psychologically hard and financially catastrophic”.

“It’s almost strange to hear a client say ‘a coffee inside please’,” Christophe Guedes, who owns a bar in the suburbs of Paris, told the AFP news agency.

An overnight curfew will also be delayed by two hours, meaning that people will be able to remain outside until 23:00 local time. The curfew could be scrapped altogether on 30 June if infection rates remain low.

Other changes include an end to rules on working from home, although employers will have to agree the number of days staff come into the office in advance.

Visitors from the EU and a number of other countries – including Australia, Israel, Lebanon and South Korea – can now visit France from without a PCR test, as long as they have completed the full course of an EU-approved vaccine (Pfizer/BioNTech, Oxford/AstraZeneca, Moderna or Johnson & Johnson).

Fully vaccinated people from other areas, including the UK and the US, will still have to provide a negative test, but will no longer have to provide a compelling reason for travel. UK visitors have to quarantine on their return home. The rules will remain in place until the EU’s green pass comes into effect in early July.

While promoting the easing of restrictions on Tuesday, President Emmanuel Macron was slapped during a visit to a hotel school in the south east of France.

President Macron later called it an “isolated event”, while politicians from across the political divide condemned the incident.

Two 28-year-old men were detained after the incident in the town of Tain-l’Hermitage. French media said firearms and a copy of Hitler’s Mein Kampf were found during a search of one of the pair, Arthur C, who is suspected of filming the slap.

What is changing in Belgium?

A similar roll-back of restrictions is taking place in Belgium from Wednesday, with cafes and restaurants allowing up to four customers per table indoors.

Indoor events of no more than 200 people, or 75% capacity, are also being permitted.

Working from home rules remain in place, although workers can now request to spend one day per week in the office as long as larger offices keep to a daily capacity of 20% of the workforce.

Belgians can now visit each other at home, with up to four visitors permitted.

The European Parliament voted on Wednesday to enshrine into law an EU-wide travel document known as the digital Covid certificate.

They will allow people who have been vaccinated, tested negative or who have recently recovered from a coronavirus infection to travel across the bloc.

Uyghurs are being deported from Muslim countries, raising concerns about China’s growing reach