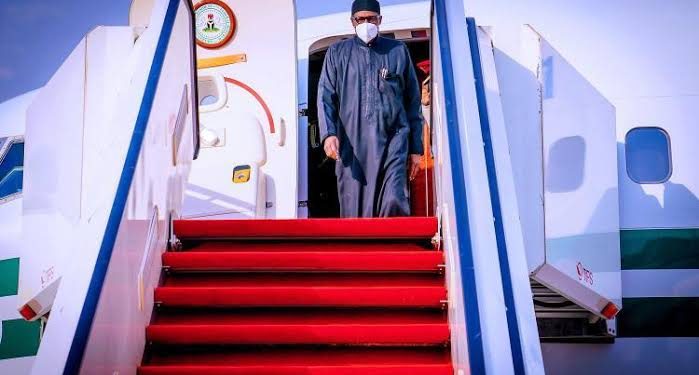 He explained that from the beginning of his administration, railway infrastructure development has been given the priority it deserves and various milestones have been reached.

“This vital line establishes an end-to-end logistic supply chain in railway transport within its short corridor, Lagos-Ibadan, as goods to the hinterland would now be transported by rail directly from the Apapa port Quayside straight to the Inland Container Depot located in Ibadan from where it can be distributed to other parts of the country,” Buhari said.

“We have in the rail sector, further to other ongoing railway infrastructure projects, embarked on the completion of the outstanding segment of the Lagos-Kano railway, which is Ibadan-Kano.

The Lagos-Kano railway project, when completed, will link the Kano-Maradi line at Kano and a rail link from the Nigeria southern ports of Lagos to Maradi in the Niger Republic.”

To the Lagos State Governor Babajide Olusola Sanwo-Olu, the standard gauge rail project is a testament to the federal government’s investment in Lagos State.

He said, “It is indeed a pride to see a project start and end within the life span of an administration. The social and economic importance of this project cannot be overemphasized. The commissioning of this rail line has made it possible for people to work in Lagos and live in Ibadan.”

Amaechi said that more than 60 staff on the project site have been infected by Covid-19 while trying to complete the project.

He said: “First, let us admit that over 60 of our staff, not ministry of transport staff, but the staff working on the rail project have been infected by COVID-19. Luckily, nobody has died and I pray nobody will die, but you see the kind of sacrifice everybody is making to get the rail to function.

“They are people sacrificing their lives to get to that point, we are of the view when we made that decision that Nigeria will not say 2020 was a bad year, so remove one year and add another year to Buhari administration.

“As far as we are concerned, we need to learn how to live with Covid-19. I really want to congratulate those that achieve that feat, we were to inaugurate the first week in January. We had to stop those doing minor completion because of the rise in Covid-19 transmission. The timeline for the inauguration will depend on Covid-19. If Covid-19 stop today or reduces we will commission the project.”